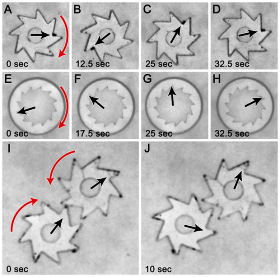 Scientists from the Argonne National Laboratory and Northwestern University have created hybrid biomechanical systems driven by bacteria and controlled by manipulation of oxygen levels. Describing their work in the Proceedings of the National Academy of Sciences, the researchers say the tiny machines provide insights for the design of bio-inspired dynamically adaptive micromachines.

"The gears are a million times more massive than the bacteria," said principal researcher Igor Aronson. "The ability to harness and control the power of bacterial motions is an important requirement for further development of hybrid biomechanical systems driven by microorganisms."

"There exists a wide gap between man-made hard materials and living tissues; biological materials, unlike steel or plastics, are 'alive.' Biomaterials, such as live skin or tissue, consume energy of the nutrients to self-repair and adapt to their environment," Aronson said. "Our discovery demonstrates how microscopic swimming agents, such as bacteria or man-made nanorobots, in combination with hard materials can constitute a 'smart material' which can dynamically alter its microstructures [or] repair damage."

The speed at which the gears turn can be controlled through the manipulation of oxygen levels in the solution. By decreasing the amount of oxygen available, the bacteria will begin to slow down. If oxygen is eliminated completely, the bacteria go into a type of "sleep" and stop completely. Once oxygen is reintroduced into the system, the bacteria "wake up" and begin swimming once again.