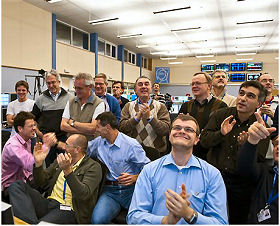 CERN Director General Rolf Heuer said LHC scientists were thrilled with the new milestone. "We are still coming to terms with just how smoothly the LHC commissioning is going. It is fantastic."

Next on the schedule is a concentrated commissioning phase aimed at increasing the beam intensity and making sure that these higher intensities can be safely handled and that stable conditions can be guaranteed for the experiments during collisions.

First physics at the LHC is scheduled for the first quarter of 2010 at a collision energy of 7 TeV (3.5 TeV per beam). Heuer says yesterday's achievement brings further confirmation that the LHC is progressing smoothly towards this objective but he remains cautious. "We are continuing to take it step by step, and there is still a lot to do before we start physics in 2010. I'm keeping my champagne on ice until then," said Heuer.