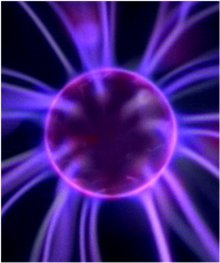 The New Journal of Physics reports that two prototype devices have been developed: one for efficient disinfection of healthy skin in hospitals and public spaces where bacteria can pose a lethal threat; and another to "shoot" bacteria-killing agents into infested chronic wounds and enable a quicker healing process.

Plasma, oft called the fourth state of matter, is defined by its ionized state. The high energy of plasma stems from some atoms or molecules in a gas being stripped of their electrons, resulting in a mix of ionized and neutral species. Low-temperature plasma has found applications in a range of industries, from plastic bag production to the manufacturing of streetlamps and semiconductor circuits.

In medicine, low-temperature plasma is already used for the sterilization of surgical instruments as plasma works at the atomic level and is able to reach all surfaces, even the interior of hollow needle ends. Its ability to disinfect is due to the generation of biologically active bactericidal agents (free radicals and UV light) which can be delivered to specific locations.

One research group from the Max Planck Institute has built and trialed a device which is capable of disinfecting human skin safely and quickly (within seconds), annihilating drug-resistant bacteria that currently cause approximately 37,000 deaths from hospital induced infections every year in European countries.

This is a major game changer in hospitals where surgeons' disinfection procedures can take up to 3 - 5 hours a day. The new plasma devices under development cut this down dramatically - to around ten minutes a day. In addition, only electricity is needed, no fluids or containers. Another device developed by researchers at the Max Planck Institute and ADTEC Plasma Technology is designed to disinfect chronic non-healing wounds.

"One can treat plasmas like a medical cocktail, which contains new and established agents that can be applied at the molecular level to cells in prescribed intensities and overall doses," explain the researchers, who say the work represents a first step in the new field of "plasma pharmacology."