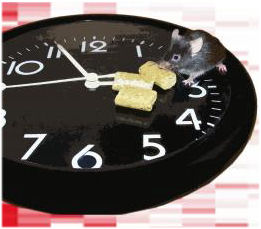 When you eat may affect your health as much as what you eat, say Salk Institute researchers who discovered that the body's critical metabolic functions are mostly controlled by food intake, and not by the body's circadian clock as was previously believed.

"If feeding time determines the activity of a large number of genes completely independent of the circadian clock, when you eat and fast each day will have a huge impact on your metabolism," says study leader Satchidananda Panda.

Published in the Proceedings of the National Academy of Sciences, the study could explain why shift workers are unusually prone to metabolic syndrome, diabetes, high cholesterol levels and obesity. "We believe that it is not shift work per se that wreaks havoc with the body's metabolism, but changing shifts and weekends, when workers switch back to a regular day-night cycle," said Panda.

The "clocks" keep time through the fall and rise of gene activity on a roughly 24-hour schedule that anticipates environmental changes and adapts many of the body's physiological function to the appropriate time of day. "The liver oscillator in particular helps the organism to adapt to a daily pattern of food availability by temporally tuning the activity of thousands of genes regulating metabolism and physiology," explained Panda. "This regulation is very important, since the absence of a robust circadian clock predisposes the organism to various metabolic dysfunctions and diseases."

Despite understanding its importance, it wasn't clear whether the circadian rhythms in hepatic transcription were solely controlled by the liver clock in anticipation of food or responded to actual food intake. To investigate how much influence rhythmic food intake exerts over the hepatic circadian oscillator, the research team put normal and clock-deficient mice on strictly controlled feeding and fasting schedules while monitoring gene expression across the whole genome.

"Food-induced transcription functions like a metabolic sand timer that runs for 24 hours and is continually reset by the feeding schedule while the central circadian clock is driven by self-sustaining rhythms that help us anticipate food, based on our usual eating schedule," said co-researcher Christopher Vollmers. "But in the real world we don't eat at the same time every day and it makes perfect sense to increase the activity of metabolic genes when you need them the most."

"Our study represents a seminal shift in how we think about circadian cycles," says Panda. "The circadian clock is no longer the sole driver of rhythms in gene function, instead the phase and amplitude of rhythmic gene function in the liver is determined by feeding and fasting periods - the more defined they are, the more robust the oscillations become." He speculates that the oscillations serve one major purpose: to separate incompatible processes, such as the generation of DNA-damaging reactive oxygen species and DNA replication.