You are here: Home › News › Global warming unstoppable?
By Will Parker on November 24, 2009 in News 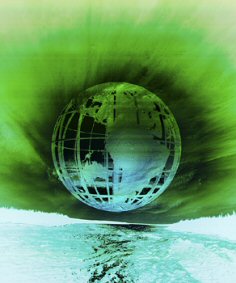 Emissions trading schemes, zero-emission vehicles and massive carbon sequestration projects aren’t even worth bothering with, claims a controversial new study that crunched the numbers and found the only way the warming trend will stop is for the world economy to collapse. “It looks unlikely that there will be any substantial near-term departure from recently observed acceleration in carbon dioxide emission rates,” says study author Tim Garrett, an associate professor of atmospheric sciences at the University of Utah.

Garrett’s study was pooh-poohed by some economists and rejected by several journals before acceptance byClimatic Change, a journal edited by Stanford University climate scientist Stephen Schneider. Key points of the study – which is based on the premise that physics can be used to model the evolution of human civilization – are:

Garrett freely admits he didn’t tackle the problem as an economist might. “I’m approaching the economy as a physics problem,” Garrett explains. “I end up with a global economic growth model different than they [economists] have.” Garrett’s model treats civilization like a heat engine that consumes energy and does work in the form of economic production, which then spurs it to consume more energy.

“If society consumed no energy, civilization would be worthless,” he explains. “It is only by consuming energy that civilization is able to maintain the activities that give it economic value. This means that if we ever start to run out of energy, then the value of civilization is going to fall and even collapse absent discovery of new energy sources.”

Garrett says his study’s key finding is that; “accumulated economic production over the course of history has been tied to the rate of energy consumption at a global level through a constant factor.” That “constant” is 9.7 (plus or minus 0.3) milliwatts per inflation-adjusted 1990 dollar. “So if you look at economic and energy production at any specific time in history, each inflation-adjusted 1990 dollar would be supported by 9.7 milliwatts of primary energy consumption,” Garrett says.

Garrett tested his theory (using United Nations statistics for global GDP, U.S. Department of Energy data on global energy consumption and previous studies that estimated global economic production as far back as 2,000 years ago) and found a constant relationship between energy use and economic production. He then set about investigating the implications for carbon dioxide emissions.

“Economists think you need population and standard-of-living to estimate productivity,” Garrett says. “In my model, all you need to know is how fast energy consumption is rising. The reason why is because there is this link between the economy and rates of energy consumption, and it’s a constant factor. By finding this constant factor, the problem of [forecasting] global economic growth is dramatically simpler. There is no need to consider population growth and changes in standard of living because they are marching to the tune of the availability of energy supplies.”

That means the acceleration of carbon dioxide emissions is unlikely to change soon because our energy use today is tied to society’s past economic productivity, according to Garrett. “Viewed from this perspective, civilization evolves in a spontaneous feedback loop maintained only by energy consumption and incorporation of environmental matter. It is like a child that grows by consuming food, and when the child grows, it is able to consume more food, which enables it to grow more.”

Perhaps the most confrontational implication of Garrett’s theory is that making civilization more energy efficient simply allows it to grow faster and consume more energy. He says the idea that resource conservation accelerates resource consumption – known as Jevons’ paradox – was proposed in the 1865 book The Coal Question by William Stanley Jevons, who noted that coal prices fell and coal consumption soared after improvements in steam engine efficiency.

So is Garrett arguing that conserving energy doesn’t matter? “I’m just saying it’s not really possible to conserve energy in a meaningful way because the current rate of energy consumption is determined by the unchangeable past of economic production. If it feels good to conserve energy, that is fine, but there shouldn’t be any pretense that it will make a difference.”

Garrett says that one effective way to halt the current warming trend would be a complete worldwide economic collapse, which would immediately lower standards of living across the globe. “Changes in population and standard of living are only a function of the current energy efficiency,” he explained. “That leaves only switching to a non-carbon-dioxide-emitting power source as an available option. The problem is that, in order to stabilize emissions, not even reduce them, we have to switch to non-carbonized energy sources at a rate about 2.1 percent per year. That comes out to almost one new nuclear power plant per day.”