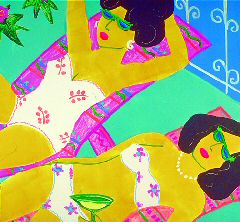 Titanium dioxide (TiO2) nanoparticles - ubiquitous in common household products such as cosmetics, sunscreen and vitamins - cause systemic genetic damage in mice, according to a new study by researchers at UCLA's Jonsson Comprehensive Cancer Center.

In the past, such nanoparticles were considered non-toxic because they did not incite a chemical reaction. But the researchers point out that it is the surface interactions that the nanoparticles have within their environment - in this case inside a mouse - that causes the genetic damage. This mechanism of toxicity is known as a physicochemical reaction.

"The novel principle is that titanium by itself is chemically inert. However, when the particles become progressively smaller, their surface, in turn, becomes progressively bigger and in the interaction of this surface with the environment oxidative stress is induced," said Schiestl. "This is the first comprehensive study of titanium dioxide nanoparticle-induced genotoxicity, possibly caused by a secondary mechanism associated with inflammation and/or oxidative stress. Given the growing use of these nanoparticles, these findings raise concern about potential health hazards associated with exposure."

"It could be that a certain portion of spontaneous cancers are due to this exposure," Schiestl speculated. "And some people could be more sensitive to nanoparticles exposure than others. I believe the toxicity of these nanoparticles has not been studied enough."

Schiestl said the data suggest that we should be concerned about a potential risk of cancer or genetic disorders - especially for people occupationally exposed to high concentrations of titanium dioxide nanoparticles, and that it might be prudent to limit their ingestion through non-essential drug additives, food colors, etc. He also pointed out that the nanoparticles cannot go through skin, so a lotion sunscreen is a safer option than spray-on sunscreens, which could be inhaled and become lodged in the lungs.