You are here: Home › News › New explanation for gamma ray bursts
By Will Parker on September 21, 2009 in News 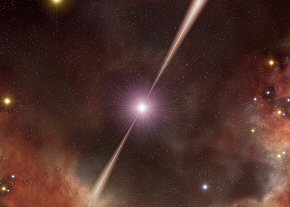 Mathematicians at the University of Leeds have proposed a radical explanation for the bright flashes in the universe that are one of the biggest mysteries in astronomy today. The flashes, known as gamma ray bursts, are beams of high energy radiation produced by jets of plasma from massive dying stars.

The orthodox model for this phenomenon involves plasma being heated by neutrinos in a disk of matter that forms around a black hole, which is created when a star collapses. But the University of Leeds researchers have come up with a different explanation: the jets come directly from black holes, which can dive into nearby massive companion stars and devour them.

Their theory is based on recent observations by the Swift satellite which indicates that some bursts from these “jet engines” can last for up to 10,000 seconds – much longer than the neutrino model can explain.

Mathematicians believe that this is evidence for an electromagnetic origin of the jets, i.e. that the jets come directly from a rotating black hole, and that it is the magnetic stresses caused by the rotation that focus and accelerate the jet’s flow.

For the mechanism to operate the collapsing star has to be rotating extremely rapidly. This increases the duration of the star’s collapse as the gravity is opposed by strong centrifugal forces.

Interestingly, one way of creating the right conditions involves not a collapsing star but a star invaded by its black hole companion in a binary system. The black hole acts like a parasite, diving into the normal star, spinning it with gravitational forces on its way to the star’s centre, and finally eating it from the inside.

“The neutrino model cannot explain very long gamma ray bursts and the Swift observations, as the rate at which the black hole swallows the star becomes rather low quite quickly, rendering the neutrino mechanism inefficient, but the magnetic mechanism can,” says Professor Komissarov from the School of Mathematics at the University of Leeds. “Our knowledge of the amount of the matter that collects around the black hole and the rotation speed of the star allow us to calculate how long these long flashes will be – and the results correlate very well with observations from satellites.”