You are here: Home › News › Unique tree could help feed Africa
By Will Parker on August 27, 2009 in News 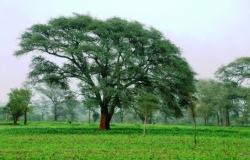 A type of acacia tree with an unusual growth habit – unlike virtually all other trees – holds particular promise for farmers in Africa as a free source of nitrogen for their soils that could last generations.

“The future of trees is on farms,” said Dennis Garrity, Director General of the World Agroforestry Centre. “Growing the right tree in the right place on farms in sub-Saharan Africa-and worldwide- has the potential to slow climate change, feed more people, and protect the environment. This tree, as a source of free, organic nitrogen, is an example of that.”

The Faidherbia acacia tree has the quality of “reverse leaf phenology,” which drives the tree to go dormant and shed its nitrogen-rich leaves during the early rainy season – when seeds are being planted and need the nitrogen – and then to re-grow its leaves when the dry season begins and crops are dormant. This makes it highly compatible with food crops because it does not compete with them for sunlight – only the bare branches of the tree’s canopy spread overhead while crops grow to maturity. Additionally, their leaves and pods provide a crucial source of fodder in the dry season for livestock when other plants have dried up.

There are some 700 published references to the tree’s history, ecology and growing habits, but according to Garrity, much of the knowledge is farmer-driven. “We are now combining the scientific knowledge base with the farmer knowledge base. There is sufficient research on both sides to warrant dramatically scaling-up the planting of this tree on farms across Africa through extension programs. The risks to farmers are low; it requires very little labor, and delivers many benefits,” he said.

UAE 00 A+/ A Euphaedra medon Nymphalidae Butterfly Butterflies of Africa