You are here: Home › News › Social networking maps infectious marsupial cancer
By Will Parker on August 19, 2009 in News 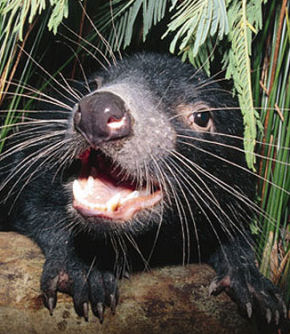 A new study into the socializing habits of Tasmanian devils has produced an intricate social network map of devil relationships, revealing how the unique infectious cancer known as devil facial tumor disease (DFTD) spreads through a population. The researchers, writing in Ecology Letters, say the study is critical for understanding the disease’s dynamics and for building epidemiological models that may help limit the spread of the disease.

Tasmanian devils, the largest marsupial carnivores in existence, are usually solitary animals, and the disease is thought to spread through biting when devils interact aggressively around prey carcasses and during mating season. In the study, researcher Rodrigo Hamede, from the University of Tasmania, explains how his team used radio collars to discover the structure of the devil’s contact network, providing an understanding of inter-devil encounters which have a profound effect on the transmission of the disease.

Previous studies of devil’s social contacts have been limited to rare field observations during feeding, and since devils mate underground it has also been difficult to gather information on individual mating contacts. The radio collars were attached to 46 sexually matured devils, 23 males and 23 females. The collars logged when and for how long any two devils were in close proximity.

“Understanding networks of contacts is crucial because it is usually the case that a small number of highly connected individuals, or ‘super spreaders’, are responsible for the majority of disease transmission,” said Hamede. “Once these individuals are identified actions such as targeted treatment or culling may control the disease.”

As predicted, some individuals played a very active role within the network demonstrating the threat of “super spreaders.” Also, contact between female devils was seen to be more common than association between males, who appeared to make efforts to avoid each other. Interestingly, while devils are thought of as promiscuous, the data revealed preferred associations between male-female pairs representing males guarding the females, demonstrating a further threat of disease through prolonged contact.

“The first stage of disease transmission is the contact between susceptible and infected individuals,” concluded Hamede. “The radio collars allowed is to measure the contacts that occur at this critical stage. The fact that all individuals are connected to a single network shows that the disease is capable of spreading to each individual in the population once one individual is infected.”