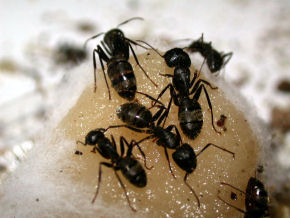 A study in the latest issue of The American Naturalist describes a fungal parasite that coerces ants into dying in just the right spot – one that is ideal for the fungus to grow and reproduce. Scientists have known for over a century about this parasite’s ability to turn unsuspecting ants into zombies. But Harvard University’s David P. Hughes has only now chronicled the amazingly precise control the fungus has over its victim.

When a carpenter ant is infected by the fungus known as Ophiocordyceps unilateralis, the victim remains alive for a short time. But, explained Hughes, the fungus is firmly in the driver’s seat. It compels the ant to climb from its nest high in the forest canopy down into small plants and saplings in the lower vegetation. The ant then climbs out onto the underside of a low-hanging leaf where it clamps down with its mandibles just before the fungus kills it.

It remains stuck there for weeks while the fungus continues to grow inside its body. After a few days, a stroma (the fungus’s fruiting body) sprouts from the back of the ant’s head. After a week or two, the stroma starts raining down spores to the forest floor below. Each spore has the potential to infect another unfortunate carpenter ant.

Working in a forest in Thailand, Hughes discovered that the infected carpenter ants are almost invariably found clamped onto the undersides of leaves that are about 10 inches from the ground below. What’s more, most of the dead ants were found on leaves sprouting from the northwest side of the plant.

Interestingly, the researchers found that temperature, humidity and sunlight in these spots are apparently optimal for the fungus to grow and reproduce. When the researchers placed leaves with infected ants at higher locations, or on the forest floor, the parasite failed to develop properly.

“The fungus accurately manipulates the infected ants into dying where the parasite prefers to be, by making the ants travel a long way during the last hours of their lives,” Hughes said. But getting the ant to die in the right spot is only half the battle. “The fungus has evolved a suite of novel strategies to retain possession of its precious resource,” he explained.

As the fungus spreads within a dead ant’s body, it converts the ant’s innards into sugars which are used to help the fungus grow. But it leaves the muscles controlling the mandibles intact to make sure the ant keeps its death grip on the leaf. The fungus also preserves the ant’s outer shell, growing into cracks and crevices to reinforce weak spots. In doing this, the fungus fashions a protective coating that keeps microbes and other fungi out. At that point, it can safely get down to the business of claiming new victims.

The ants apparently have few defenses against the fungus. The main way they avoid infection seems to be staying as far away from victims as possible. That may be part of the reason why these ants make their nests in the forest canopy, high above fungal breeding zones. Ants also seem to avoid blazing their foraging trails under infected areas. This too might be an adaptive strategy to avoid infection, Hughes believes.

The mechanisms and cues the fungus uses to control an ant’s behavior remain unknown. “That is another research area we are actively pursuing right now,” Hughes says. Whatever the mechanisms, this much is clear: O. unilateralis has evolved highly specialized abilities to get ants to do its bidding.