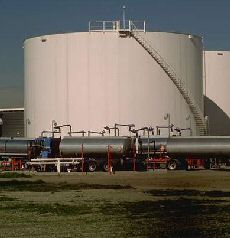 At a time when water supplies are scarce in many parts of the world, scientists from the University of Minnesota are reporting that production of bioethanol - regarded by many as the clean-burning fuel of the future - may consume up to three times more water than previously thought.

Reporting their findings in the journal Environmental Science & Technology, Sangwon Suh and colleagues point out that annual bioethanol production in the U.S. is currently about 9 billion gallons and is expected to rapidly increase in the near future. But the growing demand for bioethanol, particularly corn-based ethanol, has sparked significant concerns among researchers about its impact on water availability.

However, the paper notes that a dozen states in the Corn Belt consume less than 100 gallons of water per gallon of ethanol, making them better suited for ethanol production. "The results highlight the need to take regional specifics into account when implementing biofuel mandates," the article concludes.