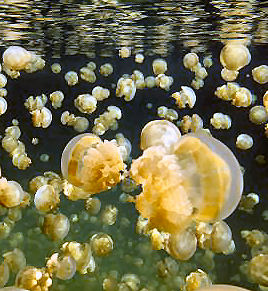 Climate change scientists may need to rethink the factors governing the interaction of the world's oceans, thanks to new findings published in Nature that show the global power input from swimming creatures such as jellyfish is as much as a trillion watts of energy, comparable to that of wind and tidal forces.

"The perspective we usually take is how the ocean - by its currents, temperature, and chemistry - is affecting animals," says John Dabiri, a Caltech bioengineer who, along with Caltech graduate student Kakani Katija, discovered the new mechanism. "But there have been increasing suggestions that the inverse is also important, how the animals themselves, via swimming, might impact the ocean environment."

But the researchers thought there might be a mechanism that had been overlooked, a mechanism they call Darwinian mixing, because it was first discovered and described by Darwin's grandson. "Darwin's grandson discovered a mechanism for mixing similar in principle to the idea of drafting in aerodynamics," Dabiri explains. "In this mechanism, an individual organism literally drags the surrounding water with it as it goes."

Using this idea as their basis, Dabiri and Katija performed mathematical simulations of what might happen if many small animals all moved at the same time, in the same direction. Darwin's mechanism would suggest that they drag some of the colder, heavier bottom water up with them toward warmer, lighter water at the top. This would create instability, and eventually, the water would flip, mixing itself as it went.

The researchers found that the water's viscosity enhances Darwin's mechanism, and that the effects are magnified with very small animals like krill and copepods. "It's like a human swimming through honey," Dabiri explains. "What happens is that even more fluid ends up being carried by a copepod, relatively speaking, than would be carried by a whale."

"There are enough of these animals in the ocean," Dabiri says, "that the global power input from this process is as much as a trillion watts of energy." While these numbers are estimates, they are likely to be conservative estimates, Dabiri says. "They were based on the fluid transport induced by individual animals swimming in isolation." In the ocean, these individual contributions to fluid transport may interact with one another, and amplify how far ocean waters can be pulled upward.