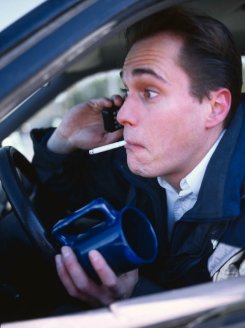 With the end of the Cold War, the extensive warning siren networks in German cities were dismantled, replaced by the satellite-based warning system SatWaS, which informs the population via radio and television of impending disasters. But German researchers concerned that citizens may have their TV and radio switched off have now applied for a technology patent that uses the simultaneous honking of thousands of car horns to alert people to catastrophic events.

A multitude of different solutions for warning systems have been developed since the demise of the Cold War sirens; SMS broadcast systems, for example. But despite the high distribution rate of some of these devices, it can't be ensured that a warning reaches the entire population. Today, fire brigades and disaster protection agencies would rather have the sirens back; but the costs are high, estimated at several hundred million Euros.

Now, German researchers have applied for a technology patent that allows the horns of parked cars to be activated in case of disaster. The technology is based on the eCall emergency system, which new cars are going to be equipped with as from September 2010. The eCall system was developed at the initiative of the EU Commission to help reduce the number of road traffic fatalities.

The system consists of a GPS sensor and a mobile phone component, which is activated only in case of an accident (i.e. when the airbags are triggered) and which can transmit data (e.g. accident time, coordinates and driving direction of the vehicle) to an emergency call center. The researchers discovered that this infrastructure can also be used to activate the vehicles' horns.

"[Other] solutions such as mobile phones or smoke detectors only inform the respective device user. [Our solution] has a clear statistical advantage: a mere 14 percent of the registered vehicles are already sufficient to provide extensive alarming. If all new vehicles are equipped with eCall from the end of next year, the warning system may be ready for use after an establishment phase of 2 to 4 years. As far as the authorities are concerned, the necessary infrastructure is already available," noted researcher Guido Huppertz.