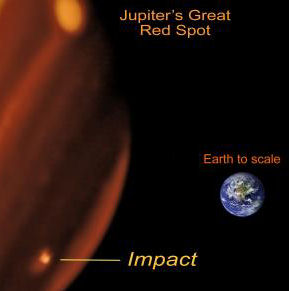 Something slammed into Jupiter over the weekend, creating a massive bruise that was picked up by amateur Australian astronomer Anthony Wesley. Now, University of California astronomer Paul Kalas has used the Keck II telescope in Hawaii to better capture an image of the moon-sized blemish. The near infrared image shows a bright spot in Jupiter's southern hemisphere, where the impact propelled reflective particles high into the relatively clear stratosphere. In visible light, the bruise appears dark against the bright surface of Jupiter.

The impact covers a 190-million-square-kilometer area as big as the Pacific Ocean. Because of the complex shape of the explosion, it is possible that tidal effects fragmented the impactor - a comet or asteroid -shortly before it collided with the planet.

The Shoemaker-Levy 9 (SL9) impact events were well-studied by astronomers, and many theories were subsequently developed based on the observations. "Now we have a chance to test these ideas on a brand new impact event," said Kalas.

"The analysis of the shape and brightness of the feature will help in determining the energy and the origin of the impactor," said Frank Marchis, who worked with Kalas to image the bruise. "We don't see other bright features along the same latitude, so this was most likely the result of a single asteroid, not a chain of fragments like for SL9."