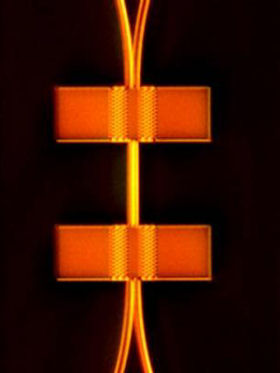 Yale University scientists have discovered a "repulsive" light force that can be used to control nanoscale components, meaning that future nanodevices might be manipulated by light rather than electricity.

The same team had previously discovered an "attractive" force of light and showed how it could be manipulated to move components in tiny electromechanical systems. Researchers had theorized the existence of both the attractive and repulsive forces since 2005, but the latter had remained unproven until now. The team, led by Yale's Hong Tang, has reported its findings in Nature Photonics.

The forces that Tang's team discovered are separate from the force created by light's radiation pressure, which pushes against an object as light shines on it. Instead, they push out or pull in sideways from the direction the light travels.

"This completes the picture," Tang said. "We've shown that this is indeed a bipolar light force with both an attractive and repulsive component." Using both forces means researchers can now have complete control over components in both directions. "We've demonstrated that these are tunable forces we can engineer," Tang added.

In order to create the repulsive force, the team split a beam of infrared light into two separate beams and forced each one to travel a different length of silicon nanowire, called a waveguide. As a result, the two light beams became out of phase with one another, creating a repulsive force with an intensity that can be controlled - the more out of phase the two light beams, the stronger the force.

"We can control how the light beams interact," said co-researcher Mo Li. "This is not possible in free space, it is only possible when light is confined in the nanoscale waveguides that are placed so close to each other on the chip."

Tang's light force is intriguing because it works in the opposite way as charged objects. Opposite charges attract each other, whereas out-of-phase light beams repel each other in this case. These light forces may one day control telecommunications devices that would require far less power but would be much faster than today's conventional counterparts.