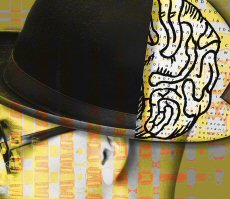 Rituximab (marketed as Rituxan), a drug that is used to treat lymphoma as well as arthritis, lupus and multiple sclerosis, has been linked to a virus known as progressive multifocal leukoencephalitis (PML) that eats away the brain's white matter.

The findings are part of a new study from the Northwestern University Feinberg School of Medicine's RADAR project, led by Charles Bennett. The RADAR project (Research on Adverse Drug Events and Reports) is an international consortium of physicians that collaborate to identify adverse reactions to medications and devices. In the journal Blood, Bennett reports on 57 cases from 1997 to 2008 in which patients with anemia, rheumatoid arthritis or lymphoma developed the fatal brain disease after taking rituximab. They died an average of two months after being diagnosed.

"Rituximab is one of the most prominent drugs in a new class called monoclonal antibodies. It's now the third monoclonal antibody that is associated with PML," said Bennett. One of the other two drugs, Raptiva, was taken off the market in April of this year because of the PML risk. The other drug, Tysabri, was removed from the market for 18 months because of similar concerns.

Bennett said the brain infection is often overlooked and undiagnosed because it is so subtle at first. "People may think it's early Alzheimer's disease or depression," he explained. "Many of these patients have cancer and when they die, people assume it's the cancer that killed them." It is not yet known how rituximab is connected to the brain virus and who may be at risk. Bennett says that the best information on the frequency of PML is among patients with lupus with an estimated rate of 1 in 4,000 patients developing PML.

Drugs like rituximab use monoclonal antibodies to target one particular protein found on the surface of cells. In lymphoma, rituximab targets a protein called CD20 on the outside of B-cell lymphomas. The antibody binds to the protein, leading to the destruction of the cancerous cell. "In non-Hodgkin's lymphoma, it turned out to be a home run," Bennett said. "It's been a magic bullet."

But concerns about the drug's association with PML first surfaced in 2006 when two patients with lupus developed the illness after taking rituximab and other immunosuppressive treatments. In 2008, Bennett said, the manufacturers of the drug, Genentech and Biogen Idec, sent letters to doctors alerting them that a patient with rheumatoid arthritis who had been taking rituximab also died from the brain infection. The companies asked whether physicians had detected this illness among cancer patients who were taking the drug.

Bennett said it was known that a small number of patients with lymphoma get the infection regardless of the drug. "But it was atypical for lupus and rheumatoid arthritis patients to get it," he said. "It was especially unusual for patients with autoimmune anemia-like illnesses who have not received a large number of other drugs."

The study results illustrate a need for caution in prescribing rituximab, Bennett said. "The drug has tremendous usefulness in lymphoma, but as its use expands to diseases that are not cancer, we might have to reconsider the risk benefit. Some cancer patients take this drug chronically for non-fatal chronic leukemia where the risk-benefit calculations differ from lymphoma."

The next step, according to Bennett, is to determine the risk factors for the disease in people who take rituximab. "We need to learn more about this. People have to think about the pros and cons in settings where it is being used for nonmalignant diseases. People have been lulled into a false sense of security that this drug is harmless and that it only does good things. No drug is perfect," he warned.