You are here: Home › News › Constructal law seeks to unify animate and inanimate designs of nature
By Will Parker on April 29, 2009 in News 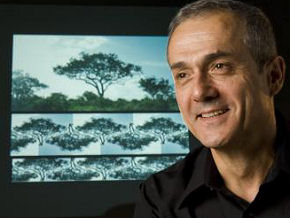 Earth’s living creatures and inanimate phenomena may have more in common than previously thought. At least that is the view of Duke University engineer Adrian Bejan (pictured) and Penn State biologist James Marden. The team’s findings have just been published in the journal Physics of Life Reviews.

What they contend connects the two worlds is a theory that “flow systems” – from animal locomotion to the formation of river deltas – evolve in time to balance and minimize imperfections. Flows evolve to reduce friction or other forms of resistance, so that they flow more easily with time. This view has been termed the constructal law, which Bejan first postulated more than a decade ago.

With Marden’s help, Bejan believes that he has now unified both the biological and geophysical principles of nature’s design through the constructal law, which can also be viewed as the physics of evolution. “This is an exciting development for physicists, but it should also resonate with biologists,” Bejan said. “The idea that organic evolution is analogous to the way form evolves in inanimate flow systems is a novel concept that has the potential to unite perspectives and approaches across disparate disciplines. We suggest that the constructal law provides a powerful tool for examining and understanding variation in both the animate and inanimate compartments of nature.”

The story begins with the two scientists trying to determine if the same laws applied to two very different forms of locomotion – the swimming of fish and the running or flying of animals. The commonly held belief among biologists was that fish locomotion was different than other animal locomotion. Since they live in water, the conventional wisdom held, fish were different because they would not be subject to gravity.

The way Bejan saw it, birds and animals could be seen as weight-lifters, since their means of locomotion required effort with an unyielding base – the ground – and a limitless top – the air. He argued that as fish swim, they too have an unyielding floor – the sea bed. Hence, water flowed over and around them like the air over runners and flyers. So, fish too were weight-lifters, and these forms of locomotion are predicted by the constructal law, Bejan said.

“Our discovery that animal locomotion adheres to the constructal law tells us that – even though you couldn’t predict exactly what animals would look like if you started evolution over on Earth, or it happened on another planet – with a given gravity and density of their tissues, the same basic patterns of their design would evolve again,” Marden explained.

In previous papers, Bejan has demonstrated that the constructal law predicts the design of a wide range of flow systems seen in nature, from biology and geophysics to social dynamics and technology evolution. “When thinking of evolution and Darwin, most people think of animals or trees,” Bejan said. “That’s too bad, because design features are everywhere in nature. The constructal law can be seen as a universal principle of evolution, which applies in many fields, from physics to economics. [It] can be seen to cover ‘natural design’ phenomena across the board.”