You are here: Home › News › Folk-medicine herbal alkaloid synthesized
By Will Parker on April 16, 2009 in News 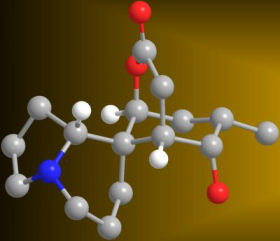 The moss Lycopodium serratum is a creeping, flowerless plant containing a potent brew of alkaloids that have attracted scientific interest thanks to their possible anti-cancer properties. However, analyzing the medicinal properties of these chemicals has been next to impossible as the plant makes them in extremely low amounts.

But that’s no longer a problem for what is arguably the most complex of these alkaloids, a compound called Serratezomine A: an alkaloid that could have anti-cancer potential and may also combat memory loss. A team of synthetic chemists at Vanderbilt University report in the Journal of the American Chemical Society that they have created an efficient way to make this molecule from scratch.

The process took six years to develop as the researchers had to invent some entirely new chemical methods to complete the synthesis. These methods should make it easier to synthesize other Lycopodium alkaloids as well as other natural compounds with therapeutic potential in the future.

In addition to their therapeutic possibilities, the Vanderbilt chemists were attracted to these compounds because they are among the most intricately structured and functionally dense of all the small molecules produced by living organisms. The compounds consist of carbon and nitrogen atoms assembled in unique ring structures.

“This was a challenging problem,” says Professor of Chemistry Jeffrey Johnston, who led the research effort. “It takes years to develop a new chemical reaction and then apply it to the natural product target. So, once we start, we don’t stop.”

The longest linear sequence in the Serratezomine A synthesis is 15 steps and it has an overall yield of 1.7 percent, Johnston says. That is an average yield of 77 percent per step. The chemists kept the sequence this short by using a strategy called convergence. They prepared one of the key fragments in the synthesis in parallel to the main sequence. Johnston has handed over the Serratezomine A that his group has produced to Vanderbilt’s drug discovery program, which identifies novel agents suitable for preclinical testing.