You are here: Home › News › Racetrack computer memory “within 10 years,” say researchers
By Will Parker on April 6, 2009 in News 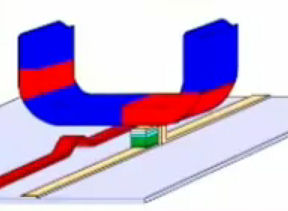 A new kind of computer memory, called “racetrack” memory, looks set to replace the hard disk as the standard method of storing information on home computers. It promises to be 100 times cheaper than flash memory and has no moving parts – instead, it is the information which moves.

Writing in Physical Review Letters, physicists at the University of Leeds and scientists at IBM Research’s Zurich lab explained how, using a kind of physics called spin transfer, electrons are used to switch the magnetism of bits of the racetrack, pushing them to a different location along a nanowire (watch a video that explains the concept).

“The reason why the hard disk on your computer is likely to break is because it has moving parts which eventually wear out, but the racetrack method of storing information is much more reliable as all the parts are static,” says Dr Chris Marrows, reader in condensed matter physics at the University of Leeds.

Compared with flash memory – the kind of solid state memory found in thumb drives – racetrack memory’s huge advantage is on price. It is estimated that a racetrack memory in a computer would be 100 times cheaper per bit than flash. “Magnetic racetrack memory is designed to replace the hard disk, and it’s estimated that it could compete on price since it’s very dense – it can store lots of bits of data on a small area of chip, as the information is stored in vertical towers,” explained Marrows.

As well as being more reliable than hard disks, racetrack memory is also faster. There are no “seek” times when the head has to search the disk for information, so computers would be able to boot up almost instantly. A fully working race track memory is anticipated to be available within 10 years.

Related:
Moore’s Law No More?
Getting A Handle On Spintronics
Mechanical Memory Set For Comeback

Battery built from GM viruses
The neurobiology of wisdom