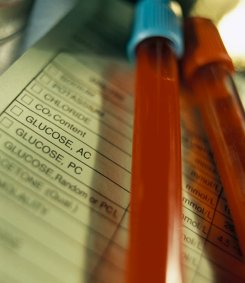 Sepsis, a potentially lethal disease caused by a systemic microbial infection that spreads via the bloodstream, is responsible for more than 200,000 deaths per year in the U.S. alone. Existing treatments can be ineffective but researchers in the Vascular Biology Program at Children's Hospital Boston have come up with a novel first line of defense - the use of magnetism to quickly remove pathogens from the blood. The new blood-cleansing device, developed by Chong Wing Yung and Don Ingber is described in the journal Lab on a Chip.

The system works by drawing the patient's blood and adding tiny magnetic beads (coated with antibodies) to it. The blood and bead mix is then run through a microfluidic system in which two liquid flow streams run side by side without mixing - one containing blood, the other a saline-based collection fluid. The beads bind to the pathogens and a magnet then pulls them (along with the pathogens) into the collection fluid, which is ultimately discarded, while the cleansed blood in reintroduced into the patient.

Tested with contaminated human blood, a device with four parallel collection modules achieved an impressive 80 percent clearance of the fungi Candida albicans in a single pass, at a flow rate and separation efficiency that would be viable for clinical applications. The researchers estimate that a scaled-up system with hundreds of channels could cleanse the blood of an infant within several hours.

"This blood-cleansing microdevice offers a potentially new weapon to fight pathogens in septic infants and adults, that works simply by removing the source of the infection and thereby enhancing the patient's response to existing antibiotics," noted Ingber, who says the next phase will be to test the device in animals.