You are here: Home › News › Redefining DNA’s structure for fun and profit
By Will Parker on March 25, 2009 in News 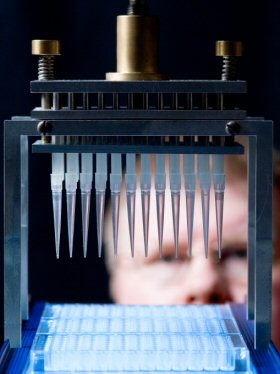 In a bold rewrite of the recipe for life, scientists have designed a new type of DNA with 12 chemical letters instead of the usual four. This artificial genetic system is already helping to usher in the era of personalized medicine for millions of patients with HIV, hepatitis and other diseases and may one day help produce a self-sustaining molecule capable of Darwinian evolution and reproduction.

Led by Steve Benner, the father of synthetic biology and uber molecular biologist, the researchers working in Benner’s labs are rewriting the rulebook that Nobel laureates James Watson and Francis Crick created when they described DNA’s structure in 1953. Watson and Crick’s discovery established how the four chemical “letters” of DNA – A, T, C and G – pair up.

Benner’s system, however, does not operate under Watson-Crick rules, so the tagging gives accurate results. Benner’s artificial alphabet already has been applied commercially. It is the basis of a viral load detector, which helps personalize the health care of those 400,000 patients annually infected with hepatitis B, hepatitis C, and HIV, the cause of AIDS,

“This is a hundred million dollar product right now,” Benner, formerly of the University of Florida, noted. “It’s used to manage cystic fibrosis, as well. We can also use this technology to go into biological samples and extract known genes with cancer-causing mutations. We can do all of this because we have an artificial DNA system.

For patients with HIV and hepatitis, the viral load detector can mean the difference between life and death. Modern drug cocktails for these diseases are highly effective, reducing the viral load in the bloodstream to nearly zero. But at some point, the virus mutates, enabling it to evade the drugs and repopulate. As the viral tide rises, there are no outward symptoms in the patient, so the mutated strain is often discovered long after the virus has spread again.

The viral load detector, which relies on Benner’s 12 letter system to tag DNA, may change that. “What we want to do with personalized care is to give you a cocktail, and then monitor you and discover when the virus becomes resistant to it,” explains Benner. “Now we don’t want to do that too soon – that would waste a lifetime of good viral inhibitors – but not too late, of course. The patient would go in once a month to get their viral load measured. At some point the virus mutates and its viral load goes up. Then you know you better change the cocktail.”

The 12 letter system might also shed light on one of most mysterious times in Earth’s history – the dawn of life nearly four billion years ago. Many scientists believe that this might have occurred when DNA’s ancient cousin, RNA, began to act like a living organism. “The idea has been that life originated on earth as RNA molecules assembled randomly and spontaneously in the prebiotic soup,” says Benner. “Then, one of them found the ability to make copies of itself. In doing so, it made those copies with imperfections, so that some of its ‘kids’ were a bit better. Most were worse, so the better ones took over more resources. That started Darwinian processes. The rest is history.”

Benner’s ultimate goal is to synthesize a similar life form in his lab at the Foundation for Applied Molecular Evolution. His 12 letter genetic system is capable of nearly all of the actions that define a living thing – reproduction, growth and response to its environment – all without the benefit of genes refined over billions of years of evolution. “But it still isn’t self-sustaining,” Benner explains. “It doesn’t look for its own food. No one has gotten that first step to work. If you start making estimates of how many molecules you have to look for in order to find one that does this, you’re talking about 10,000,000,000,000,000,000,000,000,000,000,000 molecules.”

While Benner continues to pursue a chemical system fully capable of Darwinian evolution, he emphasized the lessons already learned from the development of the 12 letter system. “We haven’t just taken things from nature, but we’ve actually understood something about how chemical structure is related to genetic behavior. With that, we’ve been able to make new versions of it,” says Benner.