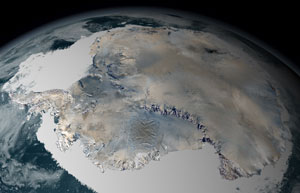 Ice in Antarctica appeared suddenly (in geologic terms) about 35 million years ago, after more than 100 million years of being relatively ice-free. Scientists have long puzzled over what triggered the formation of Antarctica's massive ice-sheets, as no evidence of global cooling during the period had been found.

"Previous evidence points paradoxically to a stable climate at the same time this event, one of the biggest climate events in Earth's history, was happening," muses Matthew Huber, assistant professor of earth and atmospheric sciences at Purdue University. Now, however, in a paper in the journal Science, Huber and a team of climate researchers have reported finding evidence of widespread cooling, and additional computer modeling of the cooling suggests that it was caused by a reduction of greenhouse gases in the atmosphere.

Before the cooling occurred at the end of the Eocene epoch, the Earth was warm and wet, and even the north and south poles experienced subtropical climates. The dinosaurs were long gone from the planet, but there were mammals and many reptiles and amphibians. Then, suddenly, this warm wet world, which had existed for millions of years, radically changed. Temperatures fell dramatically, many species of mammals as well as most reptiles and amphibians became extinct, and Antarctica was covered in ice and sea levels fell. History records this as the beginning of the Oligocene epoch. "Our studies show that just over thirty-five million years ago, 'poof,' there was an ice sheet where there had been subtropical temperatures before," Huber says. "Until now we haven't had much scientific information about what happened."

Huber says that before the event, ocean surface temperatures near Antarctica averaged 77 degrees Fahrenheit (25 degrees Celsius) but that air and ocean surface temperatures dropped as much as 18 degrees Fahrenheit during the transition. "Previous reconstructions gave no evidence of high-latitude cooling," co-researcher Mark Pagani explained. "Our data demonstrate a clear temperature drop in both hemispheres during this time."

The research team determined these ancient temperatures by using temperature "proxies." In this case, they looked for the presence of biochemical molecules, which were present in plankton that only lived at certain temperatures. The researchers looked for the temperature proxies in seabed cores collected by drilling in deep-ocean sediments and crusts from around the world.

Once the team identified the dramatic cooling, the next step was to find what caused it, using climate modeling tools running on a cluster-type supercomputer on Purdue's campus. "That's what climate models are good for. They can give you plausible reasons for such an event," Huber says. "We found that the likely culprit was a major drop in greenhouse gases in the atmosphere, especially CO2. From the temperature data and existing proxy records indicating a sharp drop in CO2 near the Eocene-Oligocene boundary, we are establishing a link between the sea surface temperatures and the glaciation of Antarctica."

Huber says the modeling required an unusually large computing effort. "My simulations produced 50 terabytes of data, which is about the amount of data you could store in 100 desktop computers. This represented 8,000 years of climate simulation," Huber says. "Fortunately, we had the resources here on campus."