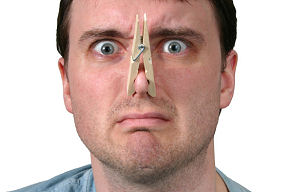 In the real world, smells don't happen one odor at a time. Animal movements distort plumes of odor molecules that constantly drift, changing direction as the wind disperses them. Now, by exploring how animals smell odors under natural conditions, Rockefeller University scientist Maria Neimark Geffen reveals that the brain encodes these swirling and complex patterns of molecules using surprisingly little neural machinery. The findings may even suggest a new theory of how animals smell odors.

Reporting in the journal Neuron, Geffen explains how she analyzed the brain activity of locusts as they smelled plumes of different odors. The plumes were generated by odor molecules released for varying durations and at varying intervals - not in metronome-like pulses as is typically done in odor studies. "In their habitat, animals don't have the luxury of smelling something for one second and then trying to figure out what it is," says Geffen. "They are getting this ever-changing signal. So how does the olfactory system encode the dynamics of that signal?"

The answer, it turns out, is surprisingly simple, but when Geffen's team initially looked at how the olfactory system responded, the results looked daunting. Even though a small population of neurons was activated in response to each odor, the pattern of activation differed from neuron to neuron.

Consider, Geffen says, that each neuron is the source of a flashing light. If the population of neurons all started flashing, each neuron would appear to be flashing in a frenetic and uncoordinated fashion relative to one another. It would be hard to envision a set of rules that coordinated such complex activity. But by looking at how the population of neurons function together, Geffen and her colleagues found that these vastly different responses could be explained by a very simple model.

"Since we know the rules that determine how these neurons behave, we can now create a model that can predict what this network in the locust olfactory system is doing," explained Geffen. "So, basically, this model summarizes, in a very sparse way, how these neurons all work together to process complex odor signals that we encounter everyday. It's evolution at its most elegant."

Geffen found that her model not only could predict the firing pattern of a neuron from the sequence of odor molecules, but it could also do the reverse: predict the odor's temporal sequence from the neuron's firing pattern. If Geffen used one neuron, the model could predict the odor's time course with 95 percent accuracy. If they used two neurons, the accuracy jumped to 97 percent. "After two, it doesn't matter," says Geffen. "What that means is that even though there is this variety of responses, individual neurons preserve almost the full information about the precise temporal dynamics of the odor."

The work builds upon two theories on how the animals encode smells. While one theory argues that subsets of neurons carry information about different odors, the other argues that the brain recognizes different odors by the firing pattern of a vast number of neurons. "What this research offers is a sparse solution that merges these two hypotheses," says Geffen. "What we are saying is that once you know which neurons to look at, the timing of when and for how long these neurons respond to odors is how the brain encodes smell."