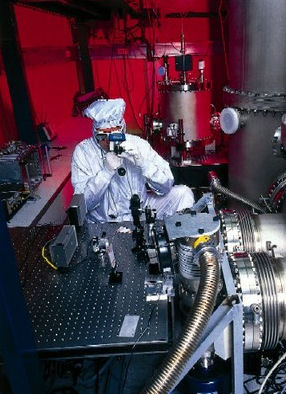 A British-German team of physicists searching the depths of space for gravitational waves may have stumbled on one of the most important discoveries in physics, according to American physicist Craig Hogan. Hogan, from the Fermilab Centre for Particle Astrophysics in Illinois, is convinced that data from a gravitational wave detector at the Centre for Gravitational Physics in Germany contains the tell-tale signature of a holographic universe. The signature, Hogan says, manifests itself as a mysterious background noise in the detector data that has so far not been explained.

The researchers operating the gravitational wave detector (known as GEO 600) will now carry out further experiments that may yield more evidence in support of Hogan's theory. If proved correct, the new findings could play a pivotal role in the quest to bring together quantum mechanics and Einstein's theory of relativity.

GEO 600, and its associated interferometric detectors, is the most sensitive scientific instrument ever designed. It can detect relative changes in distance of the order of 10-21, about the size of a single atom compared to the distance from the Sun to the Earth. It is designed to detect gravitational waves in the frequency range 50 Hz - 1.5 kHz.

In order to test the theory of holographic noise, GEO 600's maximum sensitivity will be shifted towards ever higher frequencies. Usually, it is adjusted to offer the best chance for hearing exploding stars or merging black holes.

If it turns out that the mysterious noise is the same at higher frequencies as at the lower ones, it will provide a strong motivation for further investigation. The sensitivity of GEO 600 will then be significantly improved by using what the researchers call a "squeezed vacuum," and by the installation of a mode filter in a new vacuum chamber.

"It would be truly remarkable if GEO 600 is sensitive to the quantum nature of space and time. The only way to confirm that would be to carry out controlled experiments, the results of which can be solely attributed to holographic noise. Such an experiment would herald a new era in fundamental physics," said team member Professor Bernard Schutz, from Cardiff University.

"We are very eager to find out what we can learn about the possible holographic noise over the course of the coming year. GEO 600 is the only experiment in the world able to test this controversial theory at this time. Unlike the other large laser interferometers, GEO 600 reacts particularly sensitively to lateral movement of the beam splitter because it is constructed using the principle of signal recycling. Normally this is inconvenient, but we need the signal recycling to compensate for the shorter arm lengths compared to other detectors. The holographic noise, however, produces exactly such a lateral signal and so the disadvantage becomes an advantage in this case!" explained co-researcher Proffessor Dr. Karsten Danzmann.