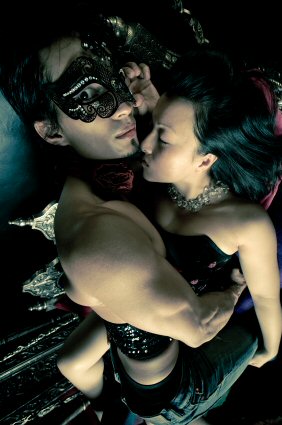 English boffins have developed a mathematical model of the mating game to help explain why courtship is often protracted. The study, by researchers from University College London (UCL), the University of Warwick and the London School of Economics and Political Science (LSE), shows that extended courtship enables a male to signal his suitability to a female and enables the female to screen out the male if he is unsuitable as a partner.

Appearing in the Journal of Theoretical Biology, the study uses game theory to analyze how males and females behave strategically towards each other in the mating game. The mathematical model considers a male and a female in a courtship encounter of unspecified duration, with the game ending when one or other party quits or the female accepts the male as a partner.

The model assumes that the male is either a "good" or a "bad" type from the female's point of view, according to his "condition" or willingness to care for the young after mating. The female gets a positive payoff from mating if the male is a "good" male but a negative payoff if he is "bad", so it is in her interest to gain information about the male's type with the aim of avoiding mating with a "bad" male. In contrast, a male gets a positive payoff from mating with any female, though his payoff is higher if he is "good" than if he is "bad."

By delaying mating, the female is able to make some use of this information to achieve a degree of screening. Because bad males have a greater tendency to quit the courtship game early, as time goes on and the male has not quit it becomes increasingly probable that he is a "good" male.

UCL's Robert Seymour noted: "Courtship in a number of animal species occurs over an extended period of time. Human courtship, for example, can involve a sequence of dinners, theatre trips and other outings lasting months or even years. One partner - often the male - may pay the greater part of the financial cost, but to both sexes there is a significant cost of time which could be spent on other productive activities. Why don't people and other animals speed things up to reduce these costs? The answer seems to be that longer courtship is a way for the female to acquire information about the male."

"By delaying mating, the female is able to reduce the chance that she will mate with a bad male. A male's willingness to court for a long time is a signal that he is likely to be a good male. Long courtship is a price paid for increasing the chance that mating, if it occurs, will be a harmonious match which benefits both sexes. This may help to explain the commonly held belief that a woman is best advised not to sleep with a man on a first date," Seymour continued.

"The strategic problem the female faces is how to screen out bad males, and this is where long courtship comes into play. A male is assumed to always want to mate with a female, but a good male is more willing to pay the cost of a long courtship in order to claim the prize of mating. This leads to an outcome in which the female is not willing to mate immediately, but instead requires the male to wait for an indeterminate time before she agrees to mate with him. During this time, the male may give up on courting the female but good males are more persistent and do not give up," added LSE's Dr Peter Sozou.