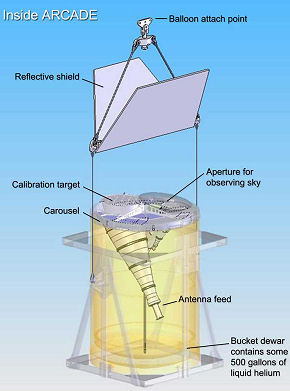 A team of NASA-funded scientists have discovered cosmic radio "noise" that is louder than the combined radio emissions of all of the galaxies in the universe. The newly detected signal suggests something "new and interesting" must have occurred as galaxies first formed, when the universe was less than half its current age.

"It seems as though we live in a darkened room and every time we turn the lights on and explore, we find something new," said team member Philip M. Lubin, a professor of physics at University of California - Santa Barbara. "The universe continues to amaze us and provide us with new mysteries. It is like a large puzzle that we are slowly given pieces to so that we can eventually see through the fog of our confusion."

The newly discovered noise complicates efforts to detect the very first stars, which are thought to have formed about 13 billion years ago - not long, in cosmic terms, after the Big Bang. Nevertheless, this cosmic static may provide important clues to the development of galaxies when the universe was less than half its present age. Unlocking its origins should provide new insight into the development of radio sources in the early universe.

"The universe really threw us a curve," says team leader Alan Kogut team leader from NASA's Goddard Space Flight Center. "Instead of the faint signal we hoped to find, here was this booming noise six times louder than anyone had predicted." Detailed analysis ruled out an origin of primordial stars or known radio sources, including gas in the outermost halo of our own galaxy. The source of this cosmic radio background remains a mystery.

The problem, notes team member Dale Fixsen of the University of Maryland, is that there don't appear to be enough radio galaxies to account for the signal ARCADE detected. "You'd have to pack them into the universe like sardines," he said. "There wouldn't be any space left between one galaxy and the next."

ARCADE is the first instrument to measure the radio sky with enough precision to detect this mysterious signal. This is thanks to ARCADE's radio receivers being immersed in more than 500 gallons of ultra-cold liquid helium - just 2.7 degrees above absolute zero. This is the same temperature as the cosmic microwave background radiation, the remnant heat of the Big Bang that was itself discovered as cosmic radio noise in 1965. "If ARCADE is the same temperature as the microwave background, then the instrument's heat cannot contaminate the cosmic signal," Kogut explained.