You are here: Home › News › Physicists measure repulsive Casimir force
By Will Parker on January 8, 2009 in News 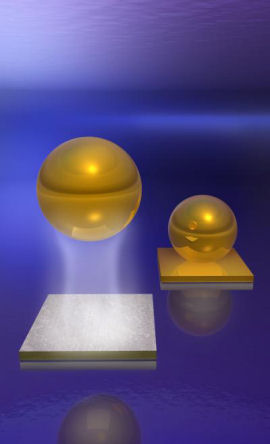 The discovery builds on previous work related to the Casimir force, an attractive force created from quantum fluctuations of the energy associated with Heisenberg’s uncertainty principle. The Casimir force becomes significant only when the space between two metallic surfaces measures less than about 100 nanometers. The new discovery, of a repulsive version of the Casimir force, was made by Harvard’s Federico Capasso and is reported inNature.

“When two surfaces of the same material, such as gold, are separated by vacuum, air, or a fluid, the resulting force is always attractive,” explained Capasso. Remarkably, but in keeping with quantum theory, when the scientists replaced one of the two metallic surfaces immersed in a fluid with one made of silica, the force between them switched from attractive to repulsive. As a result, for the first time, Capasso and his colleagues measured what they have deemed a repulsive version of Casimir.

To measure the repulsive force, the team immersed a gold coated microsphere attached to a mechanical cantilever in a liquid (bromobenzene) and measured its deflection as the distance from a nearby silica plate was varied. “Repulsive Casimir forces are of great interest since they can be used in new ultra-sensitive force and torque sensors to levitate an object immersed in a fluid at nanometric distances above a surface. Further, these objects are free to rotate or translate relative to each other with minimal static friction because their surfaces never come into direct contact,” said Capasso.

Potential applications of the team’s finding include the development of nanoscale-bearings based on quantum levitation suitable for situations when ultra-low static friction among micro- or nano-fabricated mechanical parts is necessary. Specifically, the researchers foresee new types of nanoscale compasses, accelerometers, and gyroscopes.