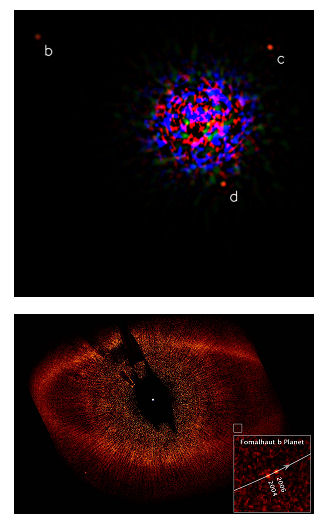 A team of astronomers using the Keck and Gemini North telescopes in Hawaii have managed to image three planets in orbit around the star HR 8799 (located about 130 light-years from Earth and just visible to the naked eye in the constellation of Pegasus).

To capture the image (above right), astronomer Christian Marois and his collaborators developed an advanced computer processing technique that helped separate the planets' glow from the much brighter light of the star. According to Marois, the new planets are young enough that they are still glowing from heat leftover from their formation which took place only 60 million years ago.

Because the planets take hundreds of years to orbit their host star, directly measuring their masses is not immediately possible. However, comparing the observed brightness across a broad range of wavelengths tells us that these planets are respectively about seven, ten, and ten times the mass of Jupiter and about 20 percent to 30 percent larger than Jupiter in diameter.

Paper co-author Travis Barman, an astronomer at Lowell Observatory said that a detailed comparison with theoretical model atmospheres confirms that all three planets possess complex atmospheres with dusty clouds partially trapping and re-radiating the escaping heat. However, the most exciting discoveries about these new planets are still to come. Now that each planet can be individually imaged, plans are underway to take the first spectra of the planets which will allow scientists to study in detail their chemical compositions, cloud structures, and thermal properties.

Meanwhile, astronomers from the University of California, Berkeley (UCB), have used the Hubble Space Telescope to capture the image of a planet orbiting the star Fomalhaut (lower right). Only 25 light years from Earth, the planet orbits the star at a distance about four times that between Neptune and the sun. Formally known as Fomalhaut b, the planet's existence was suspected in 2005 when images UCB astronomer Paul Kalas took with the Hubble Space Telescope's Advanced Camera for Surveys showed a sharply defined inner edge to the dust belt around Fomalhaut. The sharp edge and off-center belt suggested to Kalas that a planet in an elliptical orbit around the star was shaping the inner edge of the belt, much like Saturn's moons groom the edges of its rings.

"The gravity of Fomalhaut b is the key reason that the vast dust belt surrounding Fomalhaut is cleanly sculpted into a ring and offset from the star," Kalas said. "We predicted this in 2005, and now we have the direct proof."

Kalas now has two photographs of the planet, taken in 2004 and 2006, which show that its movement over a 21-month period exactly fits what would be expected from a planet orbiting Fomalhaut every 872 years at a distance of 119 astronomical units, or 11 billion miles. One astronomical unit (AU) is the average distance between the Earth and the sun, or 93 million miles. "I nearly had a heart attack at the end of May when I confirmed that Fomalhaut b orbits its parent star," Kalas said. "It's a profound and overwhelming experience to lay eyes on a planet never before seen."

Because of the relatively low mass and distant orbit of the planet, it cannot be detected by today's standard technique, which is to measure the tiny wobble a planet induces in its star. Astronomers hoping to photograph extrasolar planets have taken a different approach, looking in the infrared at young stars in hopes of detecting the warm glow from cooling planets. Fomalhaut b is not seen in the infrared, however. Instead, Kalas snapped photos in visible light, which for most planets would be impossible because of the bright glare of the star. Even with Hubble's coronagraph to block the star's light, the new planet would not have been detected if it had been much closer to its star, or much dimmer.

Interestingly, the planet mysteriously dimmed by half a stellar magnitude between the 2004 and 2006 observations. Fomalhaut b could have a hot outer atmosphere heated by bubbling convection cells, or the brightness change could indicate there is hot gas at the inner boundary of the ring around the planet. The researchers are awaiting repair of Hubble's Advanced Camera for Surveys and the Near Infrared Camera to resume their observations to confirm the planet's orbit, discover the source of its unusual brightness in the visible, and perhaps find other planets.