You are here: Home › News › MP3 headphones a potential heart stopper
By Will Parker on November 11, 2008 in News 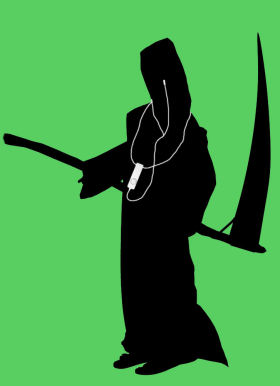 Researchers have found that while MP3 players are safe to use around pacemakers and implantable cardioverter defibrillators (ICDs), the headphones that are used with these personal stereos can make medical devices malfunction if they are brought into close proximity. Presenting their findings at the American Heart Association’s Scientific Sessions 2008, the researchers pointed the finger at the magnetic substance neodymium, which is widely used in modern headphones.

The new findings follow on from earlier research that concluded that interactions between MP3 players, such as the popular iPod, and implanted cardiac devices are unlikely to occur. “We became interested in knowing whether the headphones which contain magnets – not the MP3 players, themselves – would interact with implanted cardiac devices,” said senior author of the study William H. Maisel, director of the Medical Device Safety Institute in Boston.

Maisel explained that doctors traditionally use magnets in the clinical setting to test pacemakers, which treat slow heart rhythms. When exposed to magnets, these devices automatically pace, sending low-energy signals to the heart to make it beat. Defibrillators, which treat slow or fast heart rhythms, send either low- or high-energy signals to the heart. However, ICDs near magnets may temporarily stop “looking” for abnormal heart rhythms. Implanted cardiac devices that react in these ways to magnets outside the clinical setting can be potentially dangerous for patients, Maisel warns.

The warning is based on experiments where the researchers placed headphones on patients’ chests directly over where the cardio devices were located and monitored the subjects for evidence of an interaction. The researchers found a detectable interference with the device by the headphones in 14 patients, (23 percent). Specifically, they observed that 15 percent of the pacemaker patients and 30 percent of the defibrillator patients had a magnet response, according to Maisel. “For patients with pacemakers, exposure to the headphones can force the device to deliver signals to the heart, causing it to beat without regard to the patients’ underlying heart rhythm,” he said. “Exposure of a defibrillator to the headphones can temporarily deactivate the defibrillator. In most cases, removal of the headphones restores normal device function.”

“Even at those high levels, we did not observe any interactions when the headphones were at least 3 cm, or about 1.2 inches, from the skin’s surface. Patients should simply be instructed to keep their headphones at least 3 cm from their implantable devices,” concluded Maisel. “For family members or friends of patients with implantable defibrillators, they should avoid wearing headphones and resting their head right on top of someone’s device.”