You are here: Home › News › Selective memory erasure achieved
By Will Parker on October 23, 2008 in News 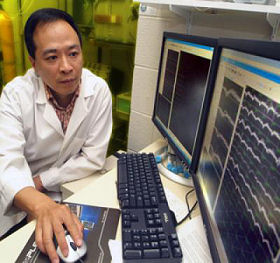 Working with rodents, scientists have been able to selectively and safely remove both new and old memories by using a protein critical to brain cell communication. “While memories are great teachers and obviously crucial for survival and adaptation, selectively removing incapacitating memories, such as traumatic war memories or an unwanted fear, could help many people live better lives,” says Dr. Joe Z. Tsien (pictured), co-director of the Brain & Behavior Discovery Institute at the Medical College of Georgia School of Medicine.

Dr. Tsien says that NMDA receptors are like front doors to cells, providing an opening for signaling molecules such as calcium. Synapses are the point of communication between two cells, and NMDA receptors are on the receiving end of the message. Like people, neurons change with the signals they receive. “Learning changes the way cells connect to each other,” says Dr. Tsien.

Dr. Tsien’s team developed a powerful chemical-genetic method that allows him to use a pharmacologic inhibitor to instantly turn αCaMKII off and on in a mouse that he genetically engineered to over express this signaling molecule. That enabled him to study exactly what happened if he threw off the natural balance during the retrieval stage.

A similar approach was taken with object recognition memory, giving mice a couple of toys to play with then erasing their memory of one of them. “You will feel like every time, it’s a new toy,” says Dr. Tsien.

Related:
We Can Forget It For You Wholesale
Instant Replay – Building Long-term Memory

Anti-obesity drugs may be effective against HIV, flu