You are here: Home › News › Next-gen adaptive optics produce sharpest ever planetary images
By Will Parker on October 3, 2008 in News 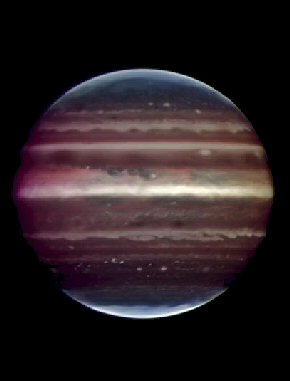 A two-hour exposure of Jupiter using a prototype Multi-Conjugate Adaptive Optics (MCAO) instrument mounted on the ESO’s Very Large Telescope (VLT) has produced the sharpest whole-planet picture ever taken from an Earth-based telescope. Taken by astronomers from the University of California, Berkeley, and the European Southern Observatory (ESO), the series of 265 snapshots reveal changes over the past three years in Jupiter’s smog-like haze, probably a response to a planet-wide upheaval more than a year ago.

The astronomers say that the images prove the value of multi-conjugate systems, which use two or more guide stars (instead of one) as references to sense the atmospheric turbulence in the instrument’s field of view, and two or more deformable mirrors to correct for it. The multiple-star technique produces sharp images over a wider area of sky – an area about three times larger than that produced by single-star adaptive optics systems employed on large telescopes such as Keck II and Gemini North in Hawaii.

“This type of adaptive optics has a big advantage for looking at large objects, such as planets, star clusters or nebulae,” said lead researcher Franck Marchis, an astronomer at UC Berkeley. “While regular adaptive optics systems provide excellent correction in a small field of view, MCAO provides good correction over a larger area of sky.” A full MCAO instrument is due to be installed on Gemini North by 2010 and is proposed for the VLT.

This allowed the researchers to observe Jupiter for almost two hours on Aug. 16 and 17, 2008, a record duration. Conventional adaptive optics systems using a single reference moon cannot monitor Jupiter for that long a period because the moon moves too far from the planet. The Hubble Space Telescope cannot observe Jupiter continuously for more than about 50 minutes, because it is regularly blocked by the Earth during Hubble’s 96-minute orbit.

With the improved imaging, the astronomers identified a major alteration in the brightness of Jupiter’s equatorial haze, which lies in a 16,000-kilometer wide belt over Jupiter’s equator. More sunlight reflecting off upper atmospheric haze means that the amount of haze has increased, or that it has moved up to higher altitudes. The brightest portion had shifted south by more than 6,000 kilometers, team member Mike Wong said.

This conclusion came from a comparison of images taken in 2005 by Wong and UC Berkeley astronomer Imke de Pater using the Hubble Space Telescope. The Hubble images, taken at infrared wavelengths very close to those used for the VLT study, show more haze in the northern half of the bright Equatorial Zone, while the 2008 VLT images show a clear shift to the south.

The haze, which could be the nitrogen compound hydrazine – used on Earth as a rocket propellant – or possibly frozen crystals of ammonia, water or ammonium hydrosulfide from deeper in the gaseous planet, is very prominent in infrared images. Because visible light can penetrate to deeper levels than infrared light, optical telescopes see light reflected from deeper, thicker clouds lying beneath the haze.

The haze behaves somewhat like particles in the tops of thunderheads on Earth or in the ash plumes from large volcanic eruptions, which rise into the upper atmosphere and spread around the world, Wong explained. On Jupiter, ammonia injected into the upper atmosphere also interacts with sunlight to form hydrazine, which condenses into a mist of fine ice particles. The hydrazine chemistry in Jupiter’s atmosphere is similar to that occurring in the Earth’s atmosphere after a volcanic eruption, when sulfur dioxide is converted by solar ultraviolet light into sulfuric acid. “The change we see in the haze could be related to big changes in cloud patterns associated with last year’s upheaval, but we need to look at more data to narrow down precisely when the changes occurred,” Wong said.