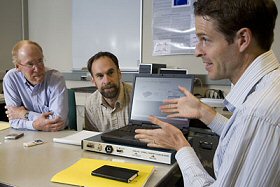 The global positioning system (GPS) has become ubiquitous in electronic devices and is critical for the smooth operation of the developed world's infrastructure, but despite government assurances to the contrary, researchers at Cornell University say that the system can be spoofed (tricked) to produce erroneous readings.

In the paper, first author Todd Humphreys (right in photo) described how the "phony" receiver could be placed in the proximity of a navigation device, where it would track, modify, and retransmit the signals being transmitted from the GPS satellite network. Gradually, the "victim" navigation device would take the counterfeit navigation signals for the real thing.

By demonstrating the vulnerability of receivers to spoofing, the researchers believe they can help devise methods to guard against such attacks. "GPS is woven into our technology infrastructure, just like the power grid or the water system," said Kintner. "If it were attacked, there would be a serious impact."

The idea of GPS receiver spoofing isn't new. The U.S. government addressed the issue in a 2003 report detailing seven "countermeasures" against such an attack. But, according to the Cornell researchers, such countermeasures would not have successfully guarded against the signals produced by their reprogrammed receiver. "We're fairly certain we could spoof all of these, and that's the value of our work," Humphreys said.