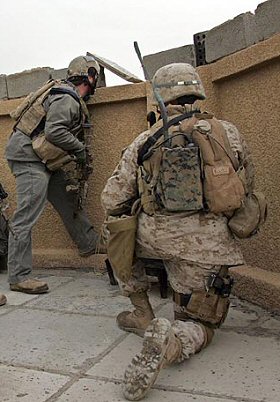 By tracking the amount of light emitted by Baghdad neighborhoods at night, a team of UCLA geographers has uncovered fresh evidence that last year's U.S. troop surge in Iraq may not have been as effective at improving security as the administration has suggested and that ethnic cleansing by rival Shiites may have been largely responsible for the decrease in violence for which the U.S. military has claimed credit.

Night light in neighborhoods populated primarily by embattled Sunni residents declined dramatically just before the February 2007 surge and never returned, say the UCLA researchers in a new study based on publicly available satellite imagery. "Essentially, our interpretation is that violence has declined in Baghdad because of intercommunal violence that reached a climax as the surge was beginning," said lead author John Agnew, a UCLA professor and authority on ethnic conflict. "By the launch of the surge, many of the targets of conflict had either been killed or fled the country, and they turned off the lights when they left."

The night-light signature in four other large Iraqi cities - Kirkuk, Mosul, Tikrit and Karbala - held steady or increased between the spring of 2006 and the winter of 2007, the UCLA team found. None of these cities were targets of the surge. Baghdad's decreases were centered in the southwestern Sunni strongholds of East and West Rashid, where the light signature dropped 57 percent and 80 percent, respectively, during the same period. By contrast, the night-light signature in the notoriously impoverished, Shiite-dominated Sadr City remained constant, as it did in the American-dominated Green Zone. Light actually increased in Shiite-dominated New Baghdad, the researchers found. Until just before the surge, the night-light signature of Baghdad had been steadily increasing overall, they contend.

"If the surge had truly 'worked,' we would expect to see a steady increase in night-light output over time, as electrical infrastructure continued to be repaired and restored, with little discrimination across neighborhoods," said co-author Thomas Gillespie. "Instead, we found that the night-light signature... appears to be associated with ethno-sectarian violence and neighborhood ethnic cleansing." Agnew adds that the surge appears to have been a case of closing the stable door after the horse has bolted.

In addition to casting doubt on the efficacy of the surge in general, the study calls into question the success of a specific strategy of the surge, namely separating neighborhoods of rival sectarian groups by erecting concrete blast walls between them. The differences in light signatures had already started to appear by the time American troops began erecting the walls under Gen. Petraeus's direction, the researchers found. "The U.S. military was sealing off neighborhoods that were no longer really active ribbons of violence, largely because the Shiites were victorious in killing large numbers of Sunnis or driving them out of the city all together," Agnew said. "The large portion of the refugees from Iraq who went during this period to Jordan and Syria are from these neighborhoods."

Related:
Stress And Aggression Reinforce Each Other
Check out the UCLA study