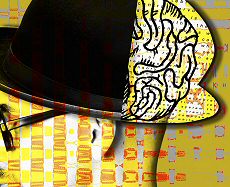 An intriguing new study reported in Psychosomatic Medicine has demonstrates that intellectual work induces a substantial increase in calorie intake. The discovery, say the Université Laval researchers involved, could go some way to explaining the current obesity epidemic.

The researchers, supervised by Dr. Angelo Tremblay, measured the spontaneous food intake of 14 students after each of three tasks: relaxing in a sitting position, reading and summarizing a text, and completing a series of memory, attention, and vigilance tests on the computer. After 45 minutes at each activity, participants were invited to eat as much as they wanted from a buffet.

The researchers had already established that each session of intellectual work actually required only a minuscule three calories more than the rest period. However, despite the low energy cost of mental work, the students spontaneously consumed 203 more calories after summarizing a text and 253 more calories after the computer tests. This represents a 24 percent and 29 percent increase, respectively, compared with the rest period.

Interestingly, blood samples taken before, during, and after each session revealed that intellectual work causes much bigger fluctuations in glucose and insulin levels than rest periods. "These fluctuations may be caused by the stress of intellectual work, or also reflect a biological adaptation during glucose combustion," hypothesized Jean-Philippe Chaput, the study's main author. "The body could be reacting to these fluctuations by spurring food intake in order to restore its glucose balance, the only fuel used by the brain."

Chaput believes that caloric overcompensation following intellectual work, combined with the fact that we are less physically active when doing intellectual tasks, could contribute to the obesity epidemic currently observed in industrialized countries. "This is a factor that should not be ignored, considering that more and more people hold jobs of an intellectual nature," he concluded.