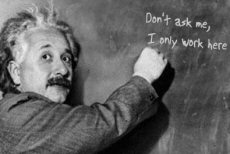 Quantum theory says that quantum particles have wave-like properties and can exist in many places at once. Why the objects we see around us every day - in what physicists call the classical world - don't behave this way despite being made of these very same quantum particles is a deep and fundamental question in modern physics.

Measuring (observing) a quantum object supposedly forces it to collapse from a waveform into one position. This collapse, according to quantum mechanics dogma, is what makes objects "real," but new verification of "collapse reversal" suggests that we can no longer assume that measurements alone create reality. It was back in 2006 that physicist Andrew Jordan, at the University of Rochester, together with Alexander Korotkov, at the University of California, Riverside, first mooted the possibility of collapse reversal.

Until then, it was believed that the instant a quantum object was measured it would "collapse" from being in all the locations it could be, to just one location like a classical object. But Jordan proposed that it would be possible to weakly measure the particle continuously, partially collapsing the quantum state, and then "unmeasure" it, causing the particle to revert back to its original quantum form, before it collapsed. Jordan's hypothesis suggests that the line between the quantum and classical worlds is not as sharply defined as had been long thought, but that it is rather a gray area that takes time to cross.

Now, in Nature News, Postdoctoral Fellow Nadav Katz explains how his team put the idea to the test and found that, indeed, it is possible to take a "weak" measurement of a quantum particle, triggering a partial collapse. Katz then "undid the damage," altering certain properties of the particle and performing the same weak measurement again. The particle was returned to its original quantum state just as if no measurement had ever been taken.

Katz contends being able to reverse the collapse "tells us that we really can't assume that measurements create reality because it is possible to erase the effects of a measurement and start again."