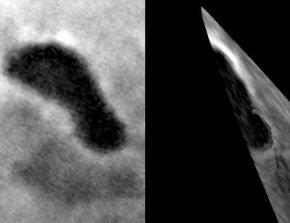 Scientists using an instrument on NASA's Cassini orbiter have confirmed that at least one other body in our solar system has a liquid lake. The lake, probably composed of ethane, is 150 miles long and located near the south pole of Saturn's moon, Titan.

The liquid lake was identified using Cassini's visual and infrared mapping spectrometer (VIMS), an instrument run from The University Arizona which identifies the chemical composition of objects by the way matter reflects light. When VIMS observed the lake, named Ontario Lacus, it detected ethane. The ethane is in liquid solution with methane, nitrogen and other low-molecular weight hydrocarbons.

"Detection of liquid ethane in Ontario Lacus confirms a long-held idea that lakes and seas filled with methane and ethane exist on Titan," said Larry Soderblom of the U.S. Geological Survey and an interdisciplinary Cassini scientist. Ethane is a simple hydrocarbon produced when ultraviolet light from the sun breaks up its parent molecule, methane, in Titan's methane-rich, mostly nitrogen atmosphere.

The ubiquitous hydrocarbon haze in Titan's atmosphere hinders the view to Titan's surface but there are transparent atmospheric "windows" at certain infrared light wavelengths through which Cassini's VIMS can see to the ground. VIMS observed Ontario Lacus on Cassini's 38th close flyby of Titan in December 2007.

The lake is roughly 7,800 square miles, just slightly larger than North America's Lake Ontario. Infrared spectroscopy doesn't indicate how deep the lake is, but the scientists speculate that it must be at least three-quarters of an inch deep.

Related:
Cassini Spots Pseudo-Hurricane On Saturn
Saturn's Rings Giving Up Some Of Their Secrets
Strange Spot On Titan Baffles Boffins