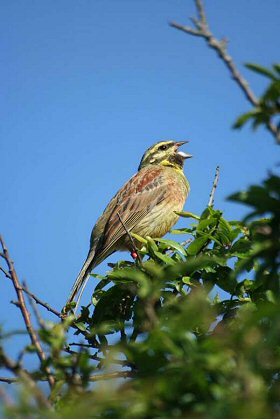 The researchers looked at twenty-five year population trends of 42 bird species in relation to changes in climatic suitability. "The results are what we expected to find given the changes in climate over the last 20 years," noted Professor Brian Huntley from The Institute of Ecosystem Science at Durham University. "Because the UK is in the middle Latitudes of Europe, we expected that recent climatic warming would favor species with ranges located in the south of Europe and adversely affect northern species."

Twitchers (bird spotters) may have to refer to new books to identify some of the new visitors to Britain's shores but those who've visited the Mediterranean region may recognize the increasing presence of the famously explosive song of Cetti's Warbler.

Among the northern species that are under threat are the Slavonian Grebe, a bird whose range extends at its southern margins to Scotland. The Fieldfare and Redwing - birds that are familiar as winter visitors to bird tables and gardens in the north-east but that breed only locally in parts of Scotland - are also suffering a downturn in numbers.