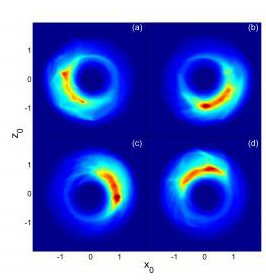 Physicists at Rice University have succeeded in getting an electron to behave in a classical manner rather than occupy the quantum states that it would usually inhabit. The giant millimeter-sized atom with a single electron orbiting it effectively realizes Danish physicist Niels Bohr's planet-like model of the hydrogen atom.

Bohr offered the first successful theoretical model of the atom in 1913, suggesting that electrons traveled in orbits around the atom's nucleus like planets orbiting a star. Bohr's model led to a deeper understanding of both the chemical and optical properties of atoms and won him a Nobel Prize in 1922. But his notion of electrons traveling in discrete orbits was eventually displaced by quantum mechanics, which revealed that electrons don't have precise positions but are instead distributed in wave-like patterns.

"In a sufficiently large system, the quantum effects at the atomic scale can transition into the classical mechanics found in Bohr's model," lead researcher Barry Dunning reported in Physical Review Letters. "Using highly excited Rydberg atoms and a series of pulsed electric fields, we were able to manipulate the electron motion and create circular, planet-like states."

The team included members from Oak Ridge National Laboratory and Vienna University of Technology. Using lasers, the researchers excited potassium atoms to extremely high levels. Using a carefully tailored series of short electric pulses, the team was then able to coax the atoms into a precise configuration with one point-like, "localized" electron orbiting far from the nucleus. In fact, the atoms are true atomic giants, with diameters approaching one millimeter.

"Our measurements show that the electrons remain localized for several orbits and behave much as classical particles," Dunning said, adding that the work has potential applications in next-generation computers and in the study of classical and quantum chaos.