You are here: Home › News › Cancer Eradicating Treatment Goes To Human Trials
By Will Parker on June 30, 2008 in News 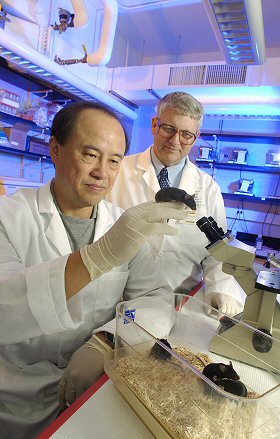 Scientists from the Wake Forest University Baptist Medical Center are about to embark on a human trial to test whether a new cancer treatment that involves the transfusion of specific white blood cells will be as effective at eradicating cancer in humans as it has proven to be in mice.

The blood cells, known as granulocytes, will be taken from healthy donors and administered to patients with advanced forms of cancer. Tantalizingly, a similar treatment using white blood cells from cancer-resistant mice has previously been highly successful, curing 100 percent of lab mice afflicted with advanced malignancies.

The new trial builds on the previous discovery of a cancer-resistant mouse and the subsequent finding that white blood cells from that mouse cured advanced cancers in ordinary laboratory mice. Importantly, the researchers have since identified similar cancer-killing activity in the white blood cells of some healthy humans.

“In mice, we’ve been able to eradicate even highly aggressive forms of malignancy with extremely large tumors,” said lead researcher Zheng Cui. “Hopefully, we will see the same results in humans. Our laboratory studies indicate that this cancer-fighting ability is even stronger in healthy humans.” The team has already tested human cancer-fighting granulocytes from healthy donors against human cervical, prostate and breast cancer cells in the laboratory – with promising results.

In a small study of human volunteers, the scientists found that cancer-killing activity in the granulocytes was highest in people under age 50. They also found that this activity can be lowered by factors such as seasonal influences or emotional stress. They said the key to the success for the new therapy is to transfuse sufficient granulocytes from healthy donors while their cancer-killing activities are at their peak level.

For the upcoming study, the researchers are currently recruiting 500 potential donors who are 50 years old or younger and in good health to have their blood tested. Of those, 100 volunteers with high cancer-killing activity will be asked to donate white blood cells for the study. Cell recipients will include 22 cancer patients who have solid tumors that either didn’t respond originally, or no longer respond, to conventional therapies.

“If the study is effective, it would be another arrow in the quiver of treatments aimed at cancer,” said co-researcher Mark Willingham. “It is based on 10 years of work since the cancer-resistant mouse was first discovered.”

This Cancer Cell Will Self-Destruct In 5 Seconds