You are here: Home › News › Grief Linked To Brain Pleasure Centers
By Will Parker on June 23, 2008 in News 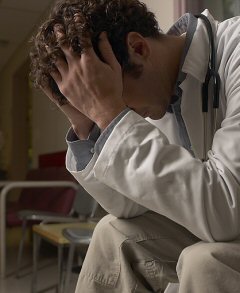 Everyone experiences grief at some point in their lives, but for a substantial number of people it’s impossible to ever move on, and even years later, any reminder of their loss brings on a fresh wave of grief and yearning. Now, scientists at the University of California – Los Angeles (UCLA) have been using brain-imaging techniques to try and understand why some people grieve and ultimately adapt, while others can’t get over the loss. Their findings, reported in the journal NeuroImage, suggest that long-term (complicated) grief activates neurons in the reward centers of the brain, possibly giving these memories addiction-like properties.

The new study is the first to compare complicated and noncomplicated grief, and the findings may help psychologists do a better job of treating those with complicated grief, according to UCLA’s Mary-Frances O’Connor, lead author of the study. “The idea is that when our loved ones are alive, we get a rewarding cue from seeing them or things that remind us of them,” O’Connor explained. “After the loved one dies, those who adapt to the loss stop getting this neural reward. But those who don’t adapt continue to crave it, because each time they do see a cue, they still get that neural reward. Of course, all of this is outside of conscious thought, so there isn’t an intention about it.”

Specifically, the researchers looked for activity in the nucleus accumbens, a region of the brain usually associated with reward (and interestingly, one that has also been shown to play a role in social attachment, such as sibling and maternal affiliation). They also examined activity in the pain network of the brain, including the dorsal anterior cingulate cortex and the insula, which has been implicated in both physical and social pain. They found that while both groups had activation in the pain network of the brain after viewing a picture of their loved one, only individuals with complicated grief showed significant nucleus accumbens activations.

O’Connor notes that such activations are not emotionally satisfying for the griever, but rather that they may serve in some people as a type of craving for the reward response that may make adapting to the reality of the loss more difficult.

Related:
Angry Looks Trigger Reward Circuits
Is Subconscious Perception the Root of All Evil?
Aggression As Rewarding As Sex
Addicted To Knowledge