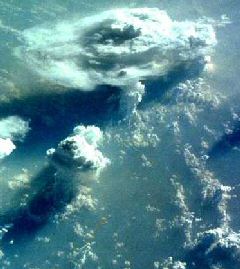 Climatologists modeling possible weather patterns that may occur when the ozone hole closes - projected to be sometime in the second half of the 21st century - say that its closure may significantly affect the climate in the Southern Hemisphere, with flow-on effects that will be felt all over the planet.

Thanks to the Montreal Protocol, which banned chlorofluorocarbon (CFC) use, ozone depletion over the Antarctic has largely halted and is expected to eventually fully reverse. As a consequence, say the scientists involved in the new study, changes to the climate in the Southern Hemisphere may also reverse. "Our results suggest that stratospheric ozone is important for the Southern Hemisphere climate change, and ought to be more carefully considered in the next set of IPCC [Intergovernmental Panel on Climate Change] model integrations," said Columbia University's Seok-Woo Son, lead-author of the study.

Son's team compared results from two sets of climate models, the first one used by the Fourth Assessment Report of the IPCC, released in late 2007, and the second from the Scientific Assessment of Ozone Depletion, published by the World Meteorological Organization in 2006. Son says that many of the IPCC models did not consider the expected ozone recovery and its potential impacts on climate change. The chemistry-climate models used for the 2006 Ozone Assessment, however, predict that the Antarctic ozone hole will achieve full recovery in the second half of this century, and that this may have profound impacts on other aspects of the Earth's climate, including surface temperatures, locations of storm tracks, extent of dry zones, amount of sea ice and ocean circulation.

Explaining the possible ramifications in Science, Son noted that in the past few decades, the tropospheric winds in the Southern Hemisphere have been accelerating closer to the planet's pole as a result of increasing greenhouse gases and decreasing ozone. This wind change has had a broad range of effects on the Earth's climate and the IPCC models predict that this effect will continue. In contrast, predictions made by the chemistry-climate models indicate that, as a consequence of ozone recovery, the tropospheric winds in the Southern Hemisphere may actually decelerate in the high latitudes and move toward the equator, potentially reversing the direction of climate change in that hemisphere.

"We were surprised to find that the closing of the ozone hole... shows significant effects on the global climate," said co-researcher Lorenzo M. Polvani. "This is because stratospheric ozone has not been considered a major player in the climate system." Polvani and Son both stress the importance that more research needs to be conducted to validate their results, and to fully understand how complete ozone recovery will impact the planet's changing climate.

The Earth Institute at Columbia University