You are here: Home › News › Line-Of-Sight SETI Revamp Proposed
By Will Parker on June 5, 2008 in News 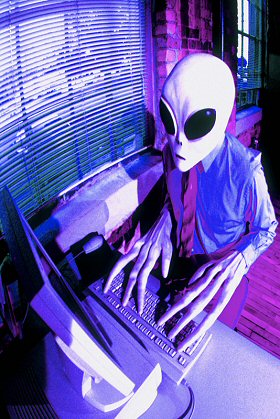 Earth-based astronomers can detect extrasolar planets as they transit across the face of distant stars, so alien astronomers should be able to detect the Earth as it moves across the face of our sun. That’s the logic behind a novel proposal to search for extraterrestrial radio signals in a tiny segment of the sky called the ecliptic band. The people behind the proposal, Richard Conn Henry, an astronomer at Johns Hopkins, along with Seth Shostak of the SETI Institute and Steven Kilston of the Henry Foundation Inc., intend to use the new Allen Telescope Array to conduct their highly targeted search.

According to Henry, who is presenting the proposal at the American Astronomical Society (AAS) annual meeting in St. Louis, the ecliptic band – a great circle around the sky that represents the plane of Earth’s orbit – is the critical place to search. The sun, as viewed from Earth, appears annually to pass along this circle. Any civilization that lies within a fraction of a degree of the ecliptic could annually detect Earth passing in front of the sun. Encouragingly, the ecliptic band comprises only about 3 percent of the sky, which would dramatically reduce the amount of radio telescope time needed to conduct the search.

“If those civilizations are out there – and we don’t know that they are – those that inhabit star systems that lie close to the plane of the Earth’s orbit around the sun will be the most motivated to send communications signals toward Earth,” Henry explained, “because those civilizations will surely have detected our annual transit across the face of the sun, telling them that Earth lies in a habitable zone, where liquid water is stable. Through spectroscopic analysis of our atmosphere, they will know that Earth likely bears life.”

Most of the 100 billion stars in our galaxy are located in the galactic plane, forming another great circle around the sky. The two great circles intersect near Taurus and Sagittarius, two constellations opposite each other in the Earth’s sky – areas where the search will initially concentrate. “The crucial implication is that this targeted search in a favored part of the sky – the ecliptic stripe, if you will – may provide us with significantly better prospects for detecting extraterrestrials than has any previous search effort,” Kilston said.

The team’s presentation at the AAS meeting also explored possible scenarios for the appearance of civilizations in our galaxy. “These models are nothing but pure speculation. We have no idea how many – if any – other civilizations there are in our galaxy. One critical factor is how long a civilization remains in existence. If, as we dearly hope, the answer is many millions of years, then even if civilizations are fairly rare, those in our ecliptic plane will have learned of our existence. They will know that life exists on Earth and they will have the patience to beam easily detectable radio signals in our direction,” Henry concluded.