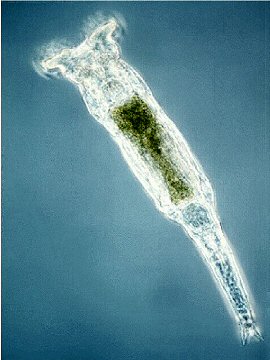 If you're an animal, you inherit your genes from your parents at the moment of conception, right? Not quite, according to scientists from the Woods Hole Marine Biological Laboratory (MBL), who have uncovered evidence of "massive" horizontal gene transfer in the animal known as the bdelloid rotifer. Reporting their findings in Science, the researchers say they have discovered numerous chunks of foreign DNA in its genome, from bacteria, fungi, and even from plants. Gene transfer on such a large scale was, until now, thought impossible in the animal kingdom.

"It is quite amazing that bdelloids are able to recruit foreign genes, which were acquired from remarkably diverse sources, to function in the new host," says MBL's Irina Arkhipova. "Bdelloids may have the capacity for tapping into the entire environmental gene pool, which may be of [evolutionarily] adaptive significance during expansion into new ecological niches, and may even contribute to bdelloid speciation."

The new findings may help to explain why bdelloids, which are exclusively asexual, have managed to diversify into more than 360 species over 40 million years of evolution. Sometimes called an "evolutionary scandal," bdelloids contradict the notion that sex - which recombines the DNA from the parents in their offspring - confers diversity and greater adaptability on a population, thereby boosting its evolutionary success. Arkhipova's study suggests that if bdelloids can incorporate foreign DNA from their environment, they could also pick up DNA from other bdelloids which, from an evolutionary standpoint, is almost as good as having sex.

How bdelloids have been able to gobble up such a variety of genes from their environment and incorporate it into their genome is a good question. Typically in animals, the germ line (the heritable egg and sperm cells) are protected from environmental assaults, such as the intrusion of foreign DNA, by the rest of the body cells, which are not heritable and serve to "sequester" the germ line. Ideas on why the bdelloids' germ line is so exposed to environmental exchange, Arkhipova says, "are all speculative. But we talk about this a lot!"

One clue is the unusual ability of bdelloids to survive total desiccation, which is fatal for most organisms. When water disappears from their environment, bdelloids enter a kind of suspended, dehydrated state, and can stay that way for months, or even years. But once water returns, they spring back to action, move around, eat things, and start reproducing again. During the desiccation phase; "you would imagine there is potential for membrane damage and DNA damage in the rotifer. And not only the rotifer desiccates, but also everything it just consumed," explains Arkhipova.

If the DNA of both the rotifer and its food are broken up during desiccation, then; "this would provide an opportunity for the [foreign] DNA to enter the rotifer's germ line. During rehydration, the DNA breakage is somehow repaired, and the foreign DNA may get incorporated," she adds.

This idea was inspired by previous studies that showed bdelloids are exceptionally good at recovering from ionizing radiation, which shatters their DNA. The rotifers' talent for repairing DNA breaks may have evolved due to their desiccation-prone lifestyle. "The effects of radiation and desiccation may be quite similar and involve damage to chromosomal DNA as well as membranes," Arkhipova suggests.

Most of the foreign genes that Arkhipova found in the bdelloid genomes were clustered near the tips of chromosomes, called the telomeres. If the bdelloids are picking up foreign DNA during desiccation; "it may be occasionally added to deprotected telomeres. Or it may simply not be selected against as efficiently as the more deleterious DNA insertions into the central, gene-rich regions of the chromosome," she concluded.