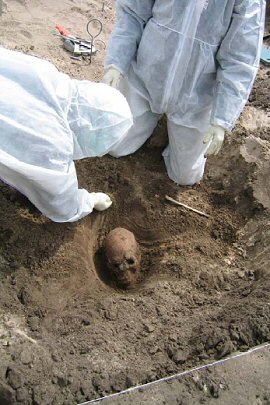 As well as raping and pillaging, Vikings are usually remembered for their horned helmets, but in a new study published in the journal PLoS ONE researchers have now begun investigating what went on under the helmet. To help understand these fearsome Norsemen, J�rgen Dissing and colleagues from the University of Copenhagen have managed to extract what they believe is authentic DNA from ancient Viking skeletons, and importantly, have avoided many of the problems of contamination faced by past researchers.

Analysis of the Viking DNA showed no evidence of contamination with extraneous DNA, and typing of the endogenous DNA gave reproducible results and showed that these individuals were just as diverse as contemporary humans. Dissing's work is important, as a truly reliable retrieval of DNA opens the way for a valuable use of prehistoric human remains to illuminate the genetic history of past and extant populations.

Related:
Ancient Man Spread The Love Around
Back To The Drawing Board For Human Migration Patterns
Chill Out... And Fight!