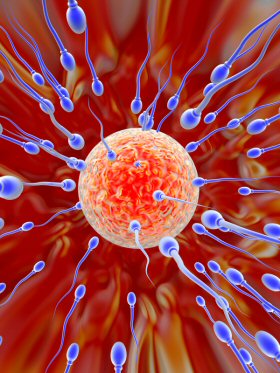 The research, published in the journal Occupational Environmental Medicine, shows that men who work with solvents such as glycol ether have a 2.5 fold increased risk of having a low motile sperm count compared to men with low exposure. Glycol ethers are widely used in many products including water-based paints. The concentration of motile sperm has been shown to be linked with conception.

The findings come from a major study to determine the occupational risks of male infertility through chemical exposure in the workplace. The study, undertaken in 14 fertility clinics in 11 cities across the UK, examined the working lives of 2,118 men. The researchers concluded that, apart from glycol ether, there are currently few workplace chemical threats to male fertility.

In additional to chemical exposure, the study also looked at other non-chemical factors in the men's lifestyles. Interestingly, the researchers discovered that men who had undergone previous surgery to the testicles or who undertook manual work were more likely to have low motile sperm counts, whereas men who drank alcohol regularly or wore boxer shorts were more likely to have better semen quality.

"We know that certain glycol ethers can affect male fertility and the use of these has reduced over the past two decades. However our results suggest that they are still a workplace hazard and that further work is needed to reduce such exposure," said Andy Povey, senior lecturer in Molecular Epidemiology at the University of Manchester.

Source: The University of Sheffield