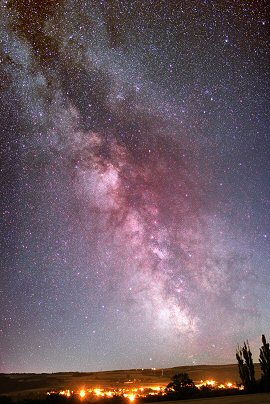 A new computer model of our solar system's movement relative to the Milky Way indicates that it "bounces" up and down through the plane of the galaxy; a cycle that scientists say is a "beautiful match" with the mass extinction events that occur periodically on Earth.

The Cardiff team says that when we pass through the galactic plane every 35 to 40 million years, the chances of a comet collision are increased tenfold. Intriguingly, evidence from craters on Earth also suggests we suffer more collisions approximately every 36 million years. "It's a beautiful match between what we see on the ground and what is expected from the galactic record," noted Cardiff's Professor William Napier.

"This is a seminal paper which places the comet-life interaction on a firm basis, and shows a mechanism by which life can be dispersed on a galactic scale," commented Centre director Professor Chandra Wickramasinghe. And in case you're interested in when the next comet infestation might occur, our present position in the galaxy suggests we are now very close to another such period.

Related:
Did The Age Of Dinosaurs Began With A Comet Impact
"Hot" Comets The Source Of Life?
Tempel's Spectra Indicate Organic Compounds And Water
Could Tempel 1 Harbor The Seeds Of Life?
Comets May Spread Life From Earth Around Galaxy