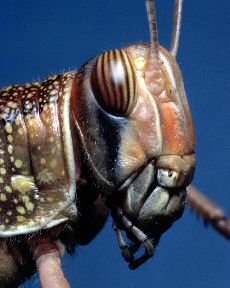 The tree of life may need to be redrawn, say researchers from Rockefeller University and the University of Tokyo who have joined forces to reveal that insects have adopted a strategy to detect odors that is radically different from those of other organisms - an unexpected and controversial finding.

Researchers had always assumed that all vertebrates and invertebrates smell odors by using a complicated biological apparatus much like a Rube Goldberg device. When molecules wafting in the air travel up the insect's nose, they latch onto a large protein (called a G-protein coupled odorant receptor) on the surface of the cell and set off a chain of similarly elaborate steps to open a molecular gate nearby, signaling the brain that an odor is present.

"It's that way in the nematode, it's that way in mammals, it's that way in every known vertebrate," says study co-author Leslie Vosshall, head of the Laboratory of Neurogenetics and Behavior at Rockefeller University. "So it's actually unreasonable to think that insects use a different strategy to detect odors. But here, we show that insects have gotten rid of all this stuff in the middle and activate the 'gate' directly."

At the University of Tokyo, Vosshall's colleague Kazushige Touhara puffed molecules onto cells engineered to make insect olfactory receptors. They then measured how long it took for the ion channel to open and recorded their electrical movement as they surged inside the cell via the channel. The rush of electrical activity occurred too fast for a series of steps to be involved, says Vosshall. In addition, poisoning several proteins involved in the G-protein pathway didn't affect the ions or the ion channel, suggesting that G-protein signaling isn't primarily involved in insect smell.

"The most consistent interpretation is that these are ion channels directly gated by odors," says Vosshall, whose findings were reported in Nature. "But the dominant thinking in the field may have reflected an experimental bias that aimed at proving a more elaborate scheme."

Touhara and Vosshall developed their ion channel hypothesis in parallel with Vosshall's work on DEET, a widely used chemical in insecticides that jams the receptor complex. Vosshall showed that DEET jams other proteins that have nothing to do with smell, including several different types of ion channels that play important roles in the human nervous system. What these radically different proteins have in common, though, is that they all specifically inhibit the influx of positively charged ions into the cell. "Now the curious result in the DEET paper showing that this insect repellent blocks insect olfactory receptors and unrelated ion channels makes sense," says Vosshall. "I am optimistic that we can come up with blockers specific for this very strange family of insect olfactory ion channels."