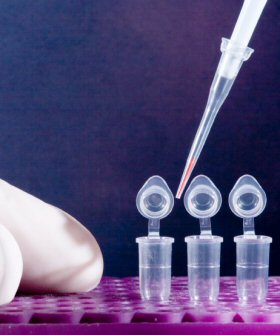 Protocols for DNA testing are being revised after a man attempted to foil a DNA paternity test by placing another man's saliva in his mouth, report forensic scientists. The attempted fraud occurred in 2007 and has prompted a number of agencies to revise their collection procedures for saliva samples.

Reporting the case in the Journal of Forensic Sciences, Dr José Antonio Lorente Acosta, from the Laboratory of Genetic Identification at the University of Granada, explained how saliva samples were collected from the subject's mouth in the normal manner. But the DNA analysis that followed showed puzzling results. "There was only one possible conclusion: In the mouth of that man there was DNA from two different persons," said Dr. Lorente.

After dismissing other possibilities, the scientists arranged to meet the subject and question him. "We showed him the result and we explained to him that we suspected that he had manipulated the samples which, as it was a trial in judicial investigation, could bring him serious consequences. Faced with the evidence, he admitted that, shortly before the sample taking, he put into his mouth some saliva he kept in a little container," explained Dr. Lorente. After repeating the test it was revealed that the subject was, in fact, the biological father.

While manipulation of blood samples had been described before, this is the first time that someone has mixed two types of saliva in order to confound a DNA test. "We must highlight that the alteration of DNA tests is almost impossible without forensic experts realizing it, but this case aroused the interest of the scientific community [and] it raises the need of adopting special measures to prevent fraud," said Dr. Lorente. To that end, protocols for saliva taking for forensic analysis now require the saliva donors to wash their mouth out with water before a witness, just before the sample is collected.