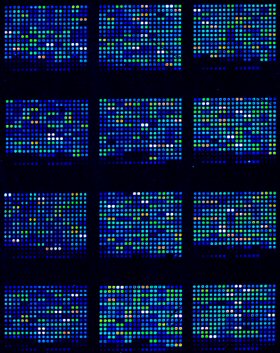 Fungi, E. Coli, DNA: meet the newest tools for digital signal processing. At least, that's according to Northwestern University computer boffins Sotirios Tsaftaris and Aggelos Katsaggelos, in their recently published "point of view" piece in the Proceedings of the IEEE (Institute of Electrical and Electronics Engineers).

But over the last decade, scientists around the world have experimented with performing signal processing using different materials. In their paper, Tsaftaris and Katsaggelos describe these experiments while stirring the engineering community towards "a possible not-so-electronic future" of digital signal processing.

As an example, the authors explain how artist/scientist Cameron Jones used audio CDs as substrates to grow fungi. Jones put the fungi-laced CDs in a CD player and found that the optically recorded sound was distorted by the fungi - and the fungi growth patterns were dependent on the optical grooves recorded on the CD. "The bacteria reacted to the recorded information, and the audio track was 'processed' by the grown fungus," Tsaftaris says. "That is essentially bacterial signal processing."

Using bacteria to process signals has even spurred a competition - the International Genetically Engineered Machine Competition at MIT, where undergraduate students compete to design biological systems that can perform simple computations. In 2005, a group modified E. coli cells to react to light, and the students created a layer of these bacteria that could perform edge detection of an image - a basic processing task.

Tsaftaris's and Katsaggelos's research also includes studying the use of DNA for digital signal processing. DNA strands can be used as input and processing elements, and, it turns out, DNA is an excellent medium for data storage. Digital samples can be recorded in DNA, which can be kept in a liquid form in test tubes to save space. DNA can also be easily replicated using common laboratory techniques, and such a database could be easily searchable, no matter how large it is. "It becomes a very attractive solution," Tsaftaris noted.

Tsaftaris hopes for a day when organic digital signal processing will allow for the implementation of the so-called "fast Fourier transform" - a widely-used method of extracting useful information from sampled signals that Tsaftaris calls the "holy grail" of DNA signal processing.

"The cost and delivery time of DNA synthesis is being reduced exponentially, making data input elegant and economical," Tsaftaris and Katsaggelos write in the paper. "DNA equipment is getting even� cheaper, such that anybody can process the signals in the office and later at home pull out their Discovery's DNA Explorer Kit or CSI's DNA Lab Kit and with their kids manipulate and analyze DNA in their living room. But of course don't forget to feed the bacteria that nurture your precious jazz collection."