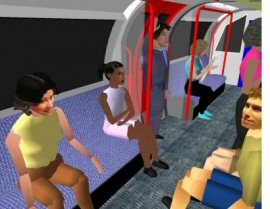 A virtual reality subway ride has been used by researchers to reveal the extent that paranoia occurs in the general public. Appearing in the British Journal of Psychiatry, the study suggests that suspicious or paranoid thoughts are much more common in the general population than was previously thought and that they are almost as common as anxiety and depression.

Until now, researchers have been unable to study paranoia (exaggerated fears about threats from others) in laboratory settings, but study author Dr Daniel Freeman at the Institute of Psychiatry, King's College London, developed a computer simulation to more precisely study paranoid thoughts.

"Paranoid thoughts are often triggered by ambiguous events such as people looking in one's direction or hearing laughter in a room, but it is very difficult to recreate such social interactions," explained Dr Freeman. "Virtual reality allows us to do just that, to look at how different people interpret exactly the same social situation. It is a uniquely powerful method to detect those liable to misinterpret other people."

Wearing virtual reality headsets, volunteers broadly representative of the general population walked around a virtual London underground (subway) carriage in a four-minute journey between station stops. The carriage contained neutral avatars that breathed, looked around, and sometimes met the gaze of the participants. One avatar read a newspaper, another would occasionally smile if looked at. A soundtrack of a train carriage was played.

The researchers found that the participants interpreted the same computer characters very differently. The most common reaction was to find the virtual reality characters friendly or neutral, but almost 40 percent of the participants experienced at least one paranoid thought. The participants were extensively assessed before entering the train ride, and it was found that those who were anxious, worried, focused on the worst-case scenarios and had low self-esteem were the most likely to have paranoid thoughts.

"In the past, only those with a severe mental illness were thought to experience paranoid thoughts, but now we know that this is simply not the case," says Dr Freeman. "About one-third of the general population regularly experience persecutory thoughts. This shouldn't be surprising. At the heart of all social interactions is a vital judgment whether to trust or mistrust, but it is a judgment that is error-prone. We are more likely to make paranoid errors if we are anxious, ruminate and have had bad experiences from others in the past."

Dr Freeman believes that paranoid thoughts are more likely to develop in settings such as on public transport, where people can feel trapped and observed. "Paranoid thinking is a topic of national discussion given increasing public attention to threats such as terrorism," says Dr Freeman. "It sometimes seems as if the one thing that unites the diverse peoples of the world is our fear of one another. Worries about other people are so common that they seem to be an essential - if unwelcome - part of what it means to be human."

Related:
Delusions And Mental Illness
Is Subconscious Perception the Root of All Evil?
The Mind & Brain